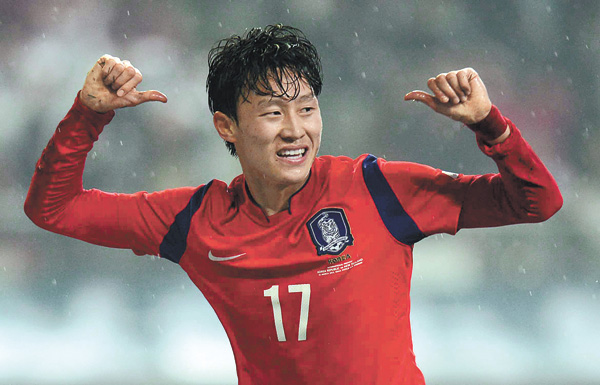 Just like Chung-yong, the 22-year-old Lee wore No. 17 during his first appearances with the Taegeuk Warriors.

In 2014, his first year as a professional, Lee had four goals and three assists in 26 K-League Classic matches and was a member of the under-23 national team at the Asia Games that delivered the gold medal for the first time in 28 years.

Still, Lee said he didn’t expect to be on the national team.

“I feel like I’m still dreaming,” he told the JoongAng Ilbo last week. “I’m happy, but at the same time I’m still puzzled.”

Lee’s position, attacking midfielder, is one of the most competitive on the national team. Since Stielike likes to position three attacking midfielders behind the striker, there are three slots, and players like Son Heung-min, Koo Ja-cheol, Kim Bo-kyung, Lee Chung-yong, Nam Tae-hee and Han Kyo-won have their eyes on the positions.

But Lee has been steadily establishing himself. In the friendly against Uzbekistan on March 27, a 1-1 draw, he played 85 minutes and made eye-catching plays.

In the friendly against New Zealand, a 1-0 victory March 31, he came in for Son in the 63rd minute and delivered the match’s only goal in the 86th minute.

“Du-ri was wrapping up his national team career, while I was starting mine, so that match was really meaningful for both of us,” he said. “I’m proud I made the retirement match more meaningful” with the goal.

Lee, a Korea University alumnus, said Cha told him to perform well and stay humble. Although he will not be playing with Cha on the national team, Lee said he looks forward facing him when playing FC Seoul.

“My task now will be passing against Cha,” he said. “I hope he doesn’t forget his promise that we should exchange uniforms after we face each other in the K-League Classic.”

According to Jeonbuk, Lee’s roommate in the clubhouse is friend Lee Ju-yong, but for away matches he has been rooming with Lee Dong-gook. The arrangement was suggested by Choi Kang-hee, who wanted Lee to learn as much as he could from the K-League Classic’s all-time leading scorer.

“Jae-sung looked a little shy and calm, but as I talked with him as a roommate he was somewhat special,” said Lee Dong-gook. “Whenever I tell him something, he absorbs it like a sponge and performs differently, which made me feel proud.”

While talking with veterans has been important, the conversation he has with himself helps him to stay focused. Lee said he has been writing a football diary since middle school. The midfielder said he always looks at the diary and writes new goals.

“From my schedule to my feelings after training, I write down everything that I can think of in the diary,” he said. “It’s my way of motivating myself when I feel lazy.”

In the past, Lee said his role model until middle school was Manchester United legend Ryan Giggs because of his left foot skills, but now he admires players like Park Ji-sung and Lee Young-pyo who have both talent and personality.

“In terms of just football skills, I want to be like Andres Iniesta or David Silva,” he said. “A player with good technique and dribble is a style I need to pursue.”