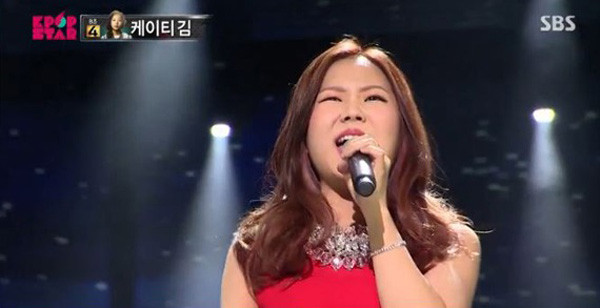 Katie Kim, a Korean-American from New Jersey, is the winner of season four of SBS’ “K-Pop Star,” a popular survival audition program.

In the final episode of the show, which aired on Sunday, the 21-year-old who is dubbed a “soul goddess” for her deep voice, and Jung Seung-hwan, referred to as an “emotional ballad singer,” went neck and neck.

The scores of the three judges contributed to 60 percent of the final result while text message votes from the audience at home made up 40 percent.

What makes “K-Pop Star” more appealing, or fiercely competitive, compared to other audition programs is because it gives an opportunity for the winner to join one of the three agencies the judges belong to: YG, JYP and Antenna Music.

“I can’t forget how Yang Hyun-suk [the head of YG] was nice to me all the time,” Kim said.

Yang said he’ll focus on keeping Kim fit and making her exercise a lot so that Kim can have a stronger voice, rather than making her debut right away.