Youn looks back on 40-year career

Youn looks back on 40-year career 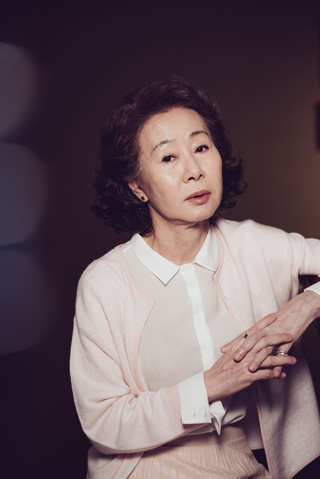 Actress Youn Yuh-jung has a career that spans more than 40 years, but just a couple of words are enough to define her image: Charismatic and picky.

Her roles playing an arrogant version of herself in “The Actresses” (2009) and as a ruthless wife in “The Taste of Money” (2012) have only fortified the reputation she has as hard to please.

However, in Kang Je-kyu’s “Salute D’Amour,” which opened at theaters nationwide on Thursday, the 67-year-old dropped much of her dominant image, playing a shy grandmother who enters a relationship with a man in his 70s working at her town’s market.

In a recent interview with Ilgan Sports, an affiliate of the Korea JoongAng Daily, the seasoned actress talked about her new movie and what spending almost 40 years acting in Korea has meant to her. 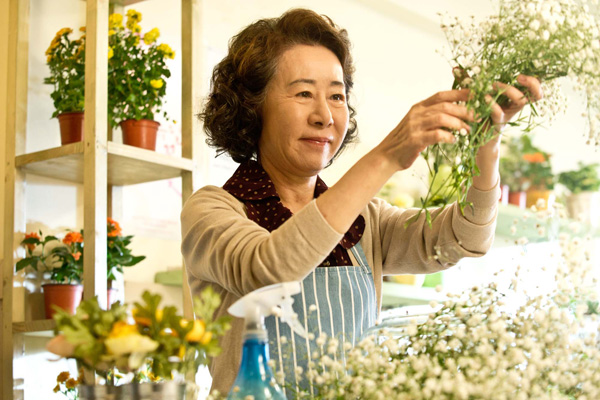 Youn Yuh-jung plays Geum-nim, a flower shop owner who falls in love later on in life, in the new film “Salute D’Amour.” Provided by STUDIO 706

A. You know, I’m not in the stage where I can grumble about acting certain kinds of emotions. Even if the script asks for explosive or unhappy emotions, I just do it. It’s my mission.

The film includes a lot of young actors. Did you give them any advice on acting?

From a point, I don’t give advice to anyone. Who am I to give advice? I’m not their teacher. Even if they’re younger and have less career experience, they are professionals too. It’s the job of a director to give them tips and advice.

What was it like to work with a director who is younger than you?

At the moment, the only director who is older than me would probably be Im Kwon-taek [laughs]. Younger directors can feel uncomfortable around me, so before going into the shoot I always remind them to use me if I am their tool. There are no right answers when it comes to acting. We are a team that has to work things out together. If the director feels nervous and can’t control me, that’s a loss to me.

Do you still feel that acting is difficult?

The more I act and build on my career, the harder acting gets. When I was a newcomer and didn’t know anything, everything was all easy. If someone said that I gave a nice performance, I really believed it. But as you age, you realize that it’s not true at all and that’s when you come to understand how intimidating the public is.

It feels like ever since you appeared on Na Young-seok’s popular variety show “Sisters Over Flowers,” you have a more positive public image. Do you agree?

Yes, because in the past when I was out on the streets I only heard people murmur behind my back, but now they come up to me and say they really enjoyed watching the traveling variety show. It’s the first time this has happened to me.

If Na asks you to do another show with him, will you do it?

Who can say no to Na these days? I have to join the trend [laughs].

How do you want to be remembered by the public?

To be frank, I don’t wish to be remembered by the public for a long time. Of course, as an actress, and therefore part of pop culture, you can never ignore what the public thinks, but they are not the ones who are always right. They can admire you today and condemn you harshly tomorrow.So I don’t want to be a popular actress, I just want to hear that I’m an actress who works really hard.

What does being an actress mean to you?

It’s just a profession that I appreciate so much. There’s nothing extraordinary about being an actress. It’s just a peculiar job that doesn’t have a strict working time.

I’m now 69 years old [Korean age], and most people my age have to retire. I’m just grateful that my job allows me to work until now and I also feel very lucky to realize this sense of appreciation before I die.