An art form with a quirky canvas

An art form with a quirky canvas 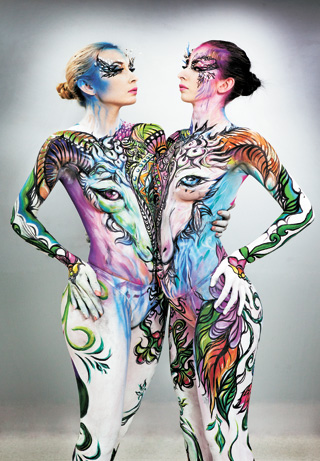 The models pose together to show an image of a ram’s head surrounded by flowers. BY PARK SANG-MOON

Kim Seon-mi and her students were busy painting on the bodies of two Russian models in a small dressing room at Jeong Hwa Arts University in central Seoul when the Korea JoongAng Daily visited her in the final week of March.

As they finished their work, the two living canvases posed together, and suddenly an image of a ram’s head with dreamy eyes appeared, surrounded by flowers and clouds in fantastic pastel colors. 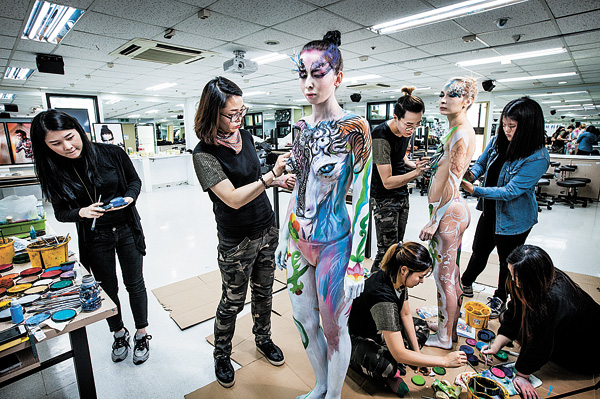 Kim Seon-mi, with her students, paint on the bodies of models. BY PARK SANG-MOON

“This is the Year of the Sheep, so I tried to visualize the feelings of the year,” Kim said.

The painter was full of life despite having spent seven hours working on her masterpiece. 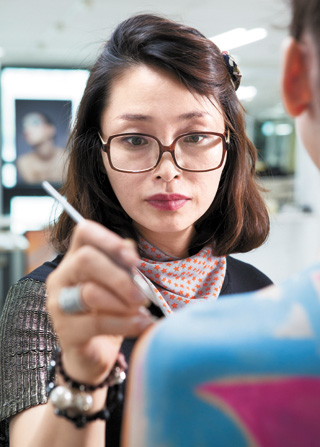 Kim, 42, the head of T.M.S., a studio, and a professor at Jeong Hwa Arts University, is a leading body paint artist in Korea.

She majored in Western painting at college and encountered the world of body paint at a makeup school operated by her sister in the 1990s.

“I felt as if I had a crush on somebody when I saw the students painting on their bodies,” she said. “It was my first time seeing paintings created on human bodies.”

Kim soon learned that there were few fine-art body painters in Korea who could teach her the craft, so she made up her mind to study abroad. She chose Paris, even though body painting as an avant-garde art started in earnest in the United States in the 1960s.

The artist went to France in 1999 and studied at the Ecole Forum Make Up School.

In 2003, her last year at the school, Kim won the top prize for body painting at the 33rd Congres international d’Esthetique Appliquee Paris - the first Korean to receive the honor in the makeup contest.

Despite her achievement, Kim went through difficulties when she came back to Korea because the body art market was so narrow and was difficult to break into for newcomers.

Kim has struggled to widen the horizon of makeup and body painting art in Korea. She said she feels as if it is a lonely struggle, partially because of the lack of people who are interested in championing body painting as art.

Through her attempts to develop the genre here, Kim said she now has a deep interest in Korean mythology and its various stories.

“Body paint needs stories to tell, and Korean mythology has many,” Kim said.

“If body paint with mythical motifs are well developed and are used for some performances, there could be performances as gorgeous as China’s Beijing Opera and Japan’s Kabuki.”

Mu Sechung, 78, a rare Korean artist who has dedicated his life to avant-garde performances, inspired Kim’s interest in Korean mythology.

Kim served as a makeup art director in one of Mu’s performances last year. She painted on the master and the other participants ahead of the show.

"Old Korean tal have ordinary people’s characters and their joys and sorrows in their facial expressions ... they carry the philosophy of the eras," Kim said.

“My body paint will develop further with the reach of Korean tal.”