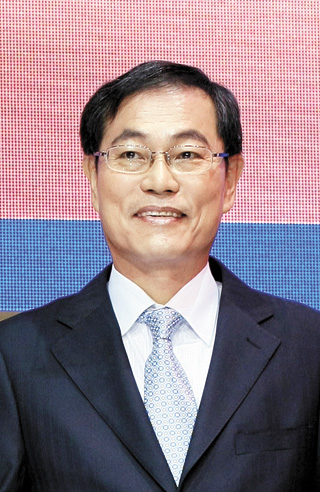 CJ Korea Express, Korea’s biggest courier delivery company, expects operating profit and sales to increase this year as it seeks to expand into warehousing and distribution in China and Southeast Asia.

Operating profit may increase more than 10 percent this year, said Yang Seung-suk, the vice chairman of CJ Korea Express. Sales are expected to rise to 5.5 trillion won ($5.03 billion), from 4.56 trillion won in 2014.

CJ Korea Express is actively pursuing overseas expansion through ventures and acquisitions as it aims to become one of the world’s top providers of distribution and warehousing services.

“Our priority right now is to focus on expanding into China and Southeast Asia,” Yang said. “CJ Group has identified logistics as the new growth engine, and we plan to become a leading player in the field.”

CJ Group, which is involved in businesses ranging from food processing to entertainment, restaurants and retail, bought Korea Express in 2011. The conglomerate’s chairman, Lee Jay-hyun, is the cousin of Samsung Group heir-apparent Jay Y. Lee.

Shares of CJ Korea Express have declined 2 percent this year, compared with a 9 percent advance in the benchmark Kospi index. The stock fell 0.3 percent April 10 to 192,000 won.

The logistics company aims to increase sales to 25 trillion won by the end of the decade, with 70 percent coming from outside Korea, according to Yang.

First-quarter operating profit is expected to increase “a lot,” Yang said, without providing a figure. January-March operating income was 27.7 billion won last year and the average of 10 analysts’ estimates compiled by Bloomberg is 48.2 billion won.

CJ Korea Express lost to Japan’s Kintetsu World Express in February in its effort to buy the logistics arm of Neptune Orient Lines of Singapore. That hasn’t stopped the Korean company from looking for other opportunities.

“To become a global player, you need to establish a good network overseas, and the most effective way is through acquisitions,” said Shin Ji-yoon, an analyst at KTB Securities. “CJ Korea Express is expected to see some positive developments in China soon.”

Yang said the company is in talks to form a venture with a partner in China - he declined to name it - and expects to sign an agreement in the first half of the year. CJ Korea Express is also planning to set up warehouse hubs in China’s Shenyang, Shanghai and Guangzhou to attract business from Chinese companies, Yang said.

CJ Korea Express also is in talks on a venture to ship cargo by river in Vietnam and on a trucking service to haul goods for Myanmar’s government, Yang said. It’s also in negotiations to acquire a company in Brazil to provide logistics, he said.

“We are aiming to have at least two or three ventures or acquisitions every year to grow our overseas business,” Yang said. “We are planning to invest a lot in the domestic market at the same time.”