Galaxy S6 may be cheaper if bought in U.S.

Galaxy S6 may be cheaper if bought in U.S. 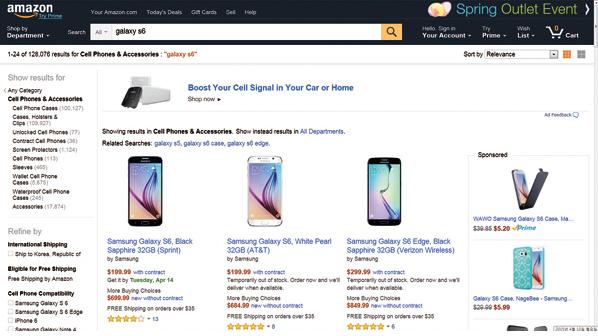 A captured image from Amazon.com where the latest Galaxy S6 from Samsung Electronics can be purchased for as much as 200,000 won cheaper than at retail stores in Korea.

After local mobile carriers decided on smaller-than-expected subsidies for Samsung Electronics’ new flagship smartphones, Galaxy S6 and S6 Edge, Koreans are looking for other ways to get the gadgets cheaply.

At shopping sites such as Amazon.com, phones are mostly classified as items that can’t be shipped outside the United States. Korean buyers have to use a purchasing agent with a virtual shipping address there by paying extra fees. The goods are shipped to the address in the United States and the agents send them to Korea afterwards.

Last October, the government announced new discounts beyond subsidies on phone purchases. The discounts are good for people who already own a phone - like a phone purchased from the United States.

The Ministry of Science, ICT and Future Planning recently revised policies to review the discounts. The 12 percent discount ceiling is set to rise to 20 percent effective on April 24.

The measure is meant to crack down on mobile carriers offering overly generous subsidies on smartphone purchases to attract more subscribers. Still, only 154,000 people have chosen so far to benefit from monthly discounts of 12 percent. But the situation may change when the discount rate is raised.

Industry insiders warn about some downsides to buying a Galaxy S6 from overseas.

“When you purchase phones from overseas, additional costs may vary hugely depending on shipping fees and the currency rate,” said a PR manager with one of three mobile carriers. “You need to closely monitor the fluctuations in subsidy amounts and other purchasing options before going ahead with direct buying.”

After-sales service is an issue too. Some overseas purchasing agents promise a one-year guarantee for service for phones shipped from overseas, but that’s almost certain to require a lot of time and hassle.