Jockeying heats up for duty free

Jockeying heats up for duty free 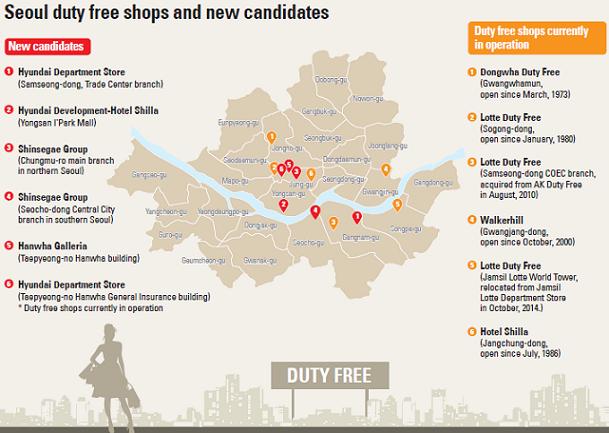 Retail giants including Lotte, Shilla and Shinsegae are competing for new duty-free licenses.

On the back of double-digit growth in the number of Chinese tourists visiting the country, the Korea Customs Service is currently accepting applications for license to open three duty-free stores in Seoul. This is the first new license for a Seoul store in 15 years.

The deadline for bids is June and the final selection will be announced in July.

The customs office will pick three companies for Seoul duty-free licences, two of which are expected to be given to conglomerates, industry insiders say. Hotel Shilla, a major duty-free shop operator, and Hyundai Development announced yesterday that they are teaming up in a bid. They have submitted a request for approval of the joint bid to the Fair Trade Commission.

With help from Hotel Shilla, Hyundai Development plans to put the duty-free shop at its I’park Mall in Yongsan, northern Seoul, adjacent to the KTX bullet train station.

Hyundai Department Store said earlier this month that it has plans to open a duty-free shop at its southeastern Seoul branch in Samseong-dong, which is at the center of so-called MICE (meetings, incentives, conferences and events) tourism complex that the Seoul Metropolitan Government is planning.

Shinsegae said it has not yet come up with detailed plans, but if Korea’s No. 2 retailer is picked as the final bidder the duty-free shop will likely open at one of its two Seoul department store branches.

Its northern Seoul branch is walking distance from Lotte’s duty-free shop near Myeongdong, a shopping district popular with Chinese tourists.

“We do not think Lotte’s [Myeongdong duty-free shop] is adequately managing rising Chinese tourist demand on its own,” Lee Nam-kon, a senior manager at Shinsegae, told the Korea Joongang Daily.

“Right now we are giving both our southern and northern Seoul branches equal consideration. Our southern Seoul branch would also be a good candidate as it is close to the hospitals where Chinese tourists like getting plastic surgery and facelifts,” Lee added.

On the back of a slump in the local retail industry amid weakening consumer demand, the duty-free business has seen strong growth in recent years. According to Korea Customs Service data, the duty-free market was worth 8 trillion won ($7.3 billion) last year, up 78 percent from 4.5 trillion won in 2010.

Currently there are six duty-free shops in Seoul, three operated by Lotte, and individual stores by Hotel Shilla, SK Networks’ Walkerhill and Dongwha.