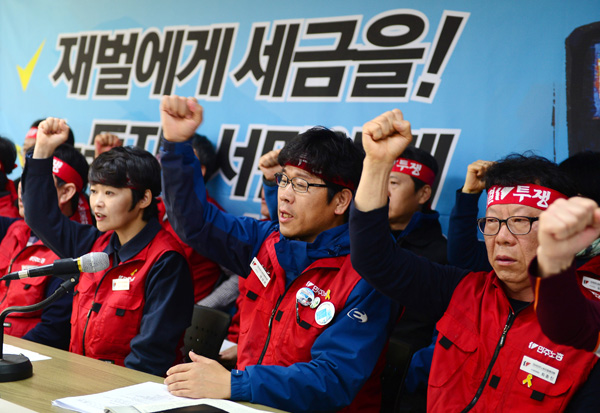 Top officials of the Korean Confederation of Trade Unions declare their decision to strike at the union’s office in Jung District in central Seoul on Monday. The union plans a massive rally at Seoul Station on April 24. [NEWSIS]

The Korean Confederation of Trade Unions (KCTU), one of the nation’s major umbrella labor groups, declared a general strike on April 23 to protest the government’s intended labor reforms.

The confederation said in a press release on Monday that 84 percent of the group’s members, or about 360,000, voted for a general strike to protest the government’s plan for structural reforms of the nation’s labor market.

The government has announced it will implement some issues agreed upon during six months of trilateral negotiations among labor, employers and the government, such as not raising salaries too much for high-income employees and cutting working hours.

The KCTU refused to attend the negotiations, saying the talks were superficial.

The talks failed after the Federation of Korean Trade Unions, another major labor group, walked away on Wednesday, unable to agree on major reforms including making it easier for employers to lay off workers and adopting the so-called “peak wage system.”

With the declaration of the strike, the KCTU also presented four demands: scrapping further talks on labor reforms; the resignation of Labor Minister Lee Ki-kwon; raising the minimum wage to 10,000 won ($9.10); and abolishing the government’s plan to revise pensions for civil servants.

“The government strived for easier lay-offs, more contract workers, and a cut in wages [the peak wage system], but the attempt failed,” Han Sang-gyun, the leader of the KCTU, said at a press conference on Monday.

The Korea Employers Federation, a major association of employers in the country, issued a statement calling the planned strike “an illegal strike.”

“The KCTU presented four demands … but they can’t be the point of a strike,” the federation said in a statement. “Also, they said the strike was decided by a vote, but some labor unions under the group did not participate in it and some members only signed onto the vote.”