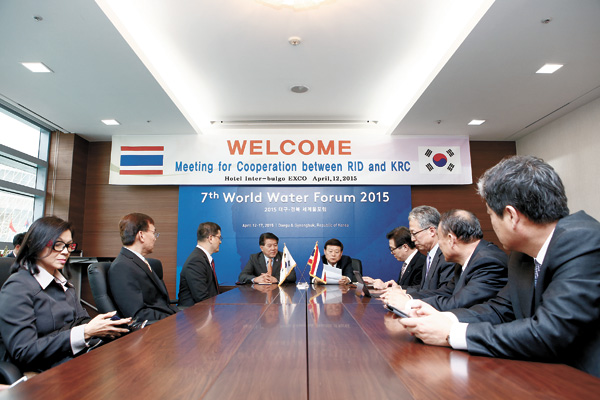 The Korea Rural Community Corporation (KRCC) and Thailand’s Royal Irrigation Department agreed to cooperate on the development of a new tidal gate near the Mekong River and the refurbishment of Rama VI dam in Tha Rua district, Ayutthaya Province.

The agreement was made on the sidelines of the 7th World Water Forum held in the Korean cities of Daegu and Gyeongju.

Lee Sang-mu, the corporation’s president, inked a contract on Sunday with his Thai counterpart, the department’s Director General Lertviroj Kowattana, at EXCO in Daegu.

The Rural Community Cooperation said that the agreement is the result of constant discussion.

“The Korea Rural Community Corporation has had an established a relationship with the Irrigation Department since 2006,” a representative from the corporation said. “Ever since we struck a memorandum of understanding (MOU) to manage water resources and develop an irrigation system in 2013, the two bodies have continued to expand the area of cooperation and partnership.”

The president of the KRCC added that the agreement is part of efforts to help developing countries manage their water and irrigation systems.

“The top agenda at this year’s World Water Forum should focus on how we can help developing countries deal with water management, drainage and irrigation systems,” he said.

On Sunday, Lee also met officials from Egypt to observe the signing of an MOU to manage coastal areas and irrigation systems in the nation.

The World Water Forum, held every three years since 1997, is the world’s largest event covering water-related issues. This year’s meeting kicked off on Sunday and was attended by politicians, business leaders and activists from around the world.