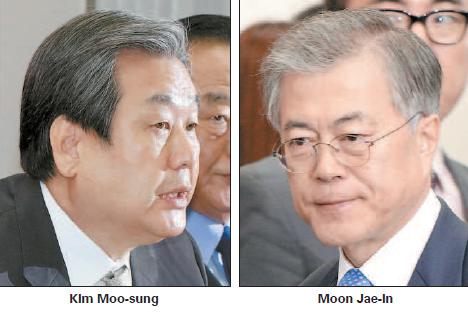 The ruling party Monday demanded the prosecution investigate not only President Park Geun-hye’s 2012 election campaign funding but also her opponent’s, amid snowballing suspicion that a construction tycoon who committed suicide last week paid illegal money to top politicians for years - and on both sides of the aisle.

Kim said he will fully cooperate with the prosecutors since he was the chief campaign manager for President Park during the 2012 election. Park ran against Moon Jae-in, chairman of the New Politics Alliance for Democracy (NPAD), and narrowly defeated him.

“I know for sure because I was the chief manager, and as far as I know, we didn’t violate any law,” Kim said about the recent scandal involving Sung Wan-jong, the former chairman of Keangnam Enterprises who was found dead Thursday, hanging from a necktie tied to a tree branch on Mount Bukhan.

A list of eight politicians, most of whom played key roles in the Park campaign, was found in his trouser pocket. Sung also gave an interview with the Kyunghyang Shinmun newspaper shortly before his death and claimed that he gave 200 million won to Saenuri Rep. Hong Moon-jong, who served as a senior manager of the Park campaign, and that the money was used for the presidential election.

Sung was convicted in 2004 on charges of violating the political funding law by giving 1.6 billion won to the United Liberal Democrats, a conservative minority party headed by political veteran Kim Jong-pil. In 2005, President Roh pardoned Sung.

He was convicted again in November 2007 on charges of breach of trust over a development project, but Roh pardoned him again the next month.

NPAD Chairman Moon responded with fury, condemning the Saenuri Party for trying to suck the opposition into its political mess.

“It is an absurd argument,” Moon said, adding that the Ministry of Justice is in charge of the special pardons.

Moon also said he was truly concerned about the future of the Park administration. “Trust is the key issue in this crisis for the Park government,” said Moon. “It will become beyond repair if the government once again conceals the truth.”

“President Park must make a life-or-death decision,” he said.

NPAD spokesman Kim Yung-rok also said the Saenuri chairman must clearly say on what grounds he was making accusations against Moon’s campaign fund. “If Kim is making groundless accusations, this is an attempt to drown the opposition party in muddy waters to divert the people’s attention.”

Criticizing the head of the ruling party for committing “low brow politics” to dodge an “unprecedentedly explosive scandal,” the NPAD spokesman said the Saenuri Party must apologize and its members must submit to the prosecution’s probe.

More attacks on Park and Prime Minister Lee Wan-koo were also made by the NAPD at the National Assembly on Monday. The list found in Sung’s pocket, which contained names, dates and money amounts, was the main topic at a hearing with senior government officials on political issues.

“In the past, President Roh Moo-hyun faced impeachment for wishing a good outcome for his party in an election,” said Rep. Jung Chung-rae of the NPAD. “If that is the standard, this corruption scandal is enough to impeach Park 10 times. It’s enough for the entire cabinet’s resignation.”

Jung also said Prime Minister Lee and presidential chief of staff Lee Byung-kee should step down as their names were among the eight politicians on Sung’s list.

“The prime minister can interfere with the prosecution’s investigation through the justice minister,” he said. “The presidential chief of staff can do the same through the civil affairs senior secretary. They must step down and submit to the probe.”

Prime Minister Lee replied Monday that he is willing to cooperate if summoned for questioning. He also rejected the assertion that he received money from Sung.

The prime minister also defended Monday a fishing expedition to find out about Sung’s last conversations with his associates on the eve of his death. The JoongAng Ilbo reported Monday that the prime minister telephoned Lee Yong-hee, vice chairwoman of the Taean County council, on Saturday and questioned her about what she had discussed with Sung. Taean was Sung’s constituency.

Sung met her on Wednesday, the day before his death, and expressed his disappointment in the prime minister, Lee Yong-hee had earlier said.