Success comes after a series of struggles, loss

Success comes after a series of struggles, loss 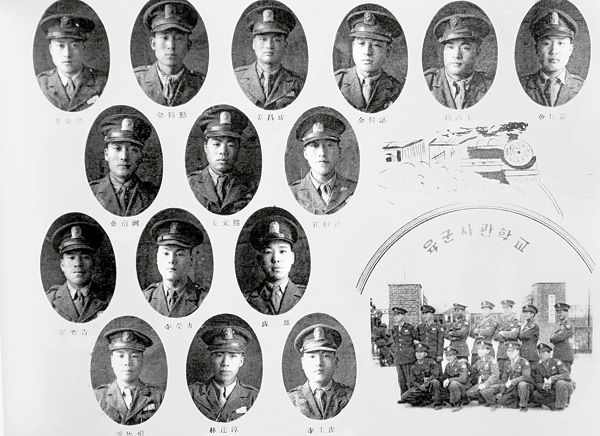 A yearbook photo of 23-year-old Kim Jong-pil and his fellow military academy graduates, who were commissioned on May 23, 1949. Kim is fourth from left. Provided by Kim Jong-pil

For two years, between 1946 and 1948, I tasted the sweetness of college coupled with the bitterness of reality. I enrolled at Seoul National University to study education, dreaming about a setting like Eton College in a liberated Korea. But during my second year, my father died, leaving our family with massive debts from a failed gold mine investment. After settling those debts, all we had left was a house in Seoul and another in my father’s hometown in South Chungcheong.

I leased the Seoul house and purchased a small used car with the money from the lease and registered to use it as a cab. In June 1948, I gave up on my education due to the worsening financial strain and made ends meet working as a taxi driver.

Just a month after I started my taxi business, I was involved in a car accident. In early July 1948, a tram turned its course and rammed the cab. I wasn’t injured, but the vehicle’s right side was badly wrecked and I had to get rid of it. At that point, it seemed like I had run out of luck. My mother was a widow and had no money saved.

The next day, I saw a recruitment poster in front of Pagoda Park in the Jongno District for infantry solders under the Army’s nascent 13th infantry regiment. I submitted my application on the spot. 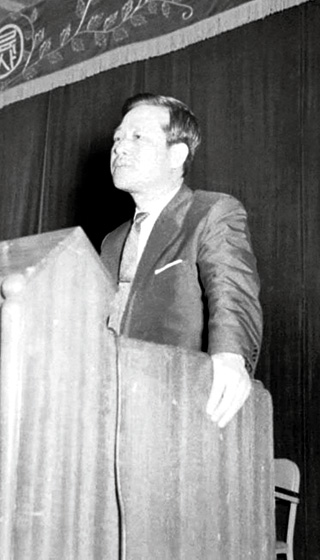 Kim Jong-pil addresses his fellow Korean Military Academy classmates on May 23, 1966, to commemorate the 17th anniversary since their graduation. Provided by Kim Jong-pil

At 1 p.m. the next day, I had my physical examination in front of Yongsan Station. The examiner declared me fit to serve and told me to wait. The same day, I got on a train bound for Cheonan in South Chungcheong for boot camp.

The 13th regiment was set up in the playground of an elementary school. In a telltale sign of the rampant poverty in the pre-divided Korea, we were issued shirts and shorts for work uniforms, instead of formal military attire.

Apparently influenced by the training style of the Japanese Imperial Army during its 36-year colonial rule, we were constantly subject to physical disciplinary punishment for little to no reason. With no guns provided, we had no military instructions except for close-order drills.

Military meals were nothing but rice mixed with corn, and everyone had a [bloated] stomach due to the poor quality of the food. I enlisted in the Army because I sought a new life filled with renewed opportunities at the expense of my higher education. But I felt as if the military was depriving me of whatever chance I had left.

On the 10th day, I stood guard at the barracks with fellow classmate Im Dal-soon.

It was pouring rain that night, and I disclosed to him my plan to escape.

But he turned down my idea, saying, “I came from the North. There is no one to look after me, unlike you. At least I get to be fed here. If you want to run, you can do it on your own.”

So I asked him not to report my absence for the next two hours.

I jumped over the barbed-wire fence and headed to my friend’s house, a friend who had recently gotten married. Standing at the door, I called out my friend’s name.

Young-min, my classmate from middle school, shut his door as soon as he saw my face, thinking I was a beggar. I called out his name again, saying it was me, Jong-pil. After staying at his house for a night, I headed back to Seoul. But my mind was filled with a sense of regret and guilt.

I was becoming more and more embarrassed and ashamed. So on Aug. 3, 1948, about three weeks after I deserted, I went to a movie in Eulji-ro, central Seoul. At the theater, I saw a group of men in military uniforms.

“Most of those in uniforms had enlisted with only middle school diplomas. And I had dropped out of the program having once been enrolled at a university. How shameful is that?” I kept asking myself. I stood up from my seat and found the military official overseeing the group. I told the official, First Lieutenant Ki Se-hoon, that I had gone AWOL but now wished to return to the military.

He asked me about my education and I told him I was once a student at Seoul National University. “You are an elitist for having pursued a college degree,” he said. “Why do you want to join the army again?”

I begged him to accept me as one of his fellow soldiers and he eventually accepted.

About two weeks after re-enlisting, my classmates and I were told to write an essay explaining why we wanted to join the Army. I detailed my educational background as well as why I had decided to run away from the Army just months ago. Four days later, another first lieutenant, Choi Taek-won, summoned me to his office.

As I entered, he said, “Why are you receiving training with those who are less than you?”

He then recommended I take the test for the Korean Military Academy, the equivalent of West Point in the United States.

In January of the next year, I took the admissions test for the academy and passed. The competition was fairly intense and only one in 10 applicants gained admission.

I was among the eighth group of graduates and the duration of our training only lasted five months. At my graduation ceremony on May 23, 1949, I met my mother for the first time in nearly a year. I gave her a big hug as a proud son while she cried.