Sung kept diaries of his meetings

Sung kept diaries of his meetings 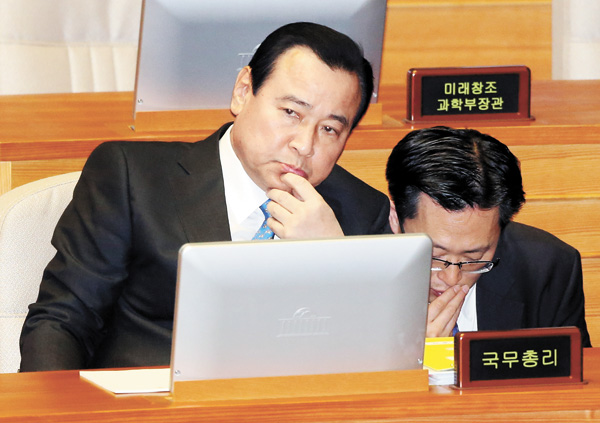 Prime Minister Lee Wan-koo, left, talks with an aide before he answers questions at a National Assembly hearing on Monday. By Kim Seong-ryong

Sung Wan-jong, a construction tycoon who claimed before his suicide last week to have paid money to the inner circle of President Park Geun-hye for years, kept a journal of his meetings with top politicians and government officials since 2004, the JoongAng Ilbo learned Monday.

In his diaries, Sung recorded dates and locations of his meetings with powerful men including Prime Minister Lee Wan-koo, Blue House chief of staff Lee Byung-kee, UN Secretary-General Ban Ki-moon and Kim Han-gill, former head of the main opposition New Politics Alliance for Democracy (NPAD). The JoongAng Ilbo exclusively obtained copies of about two years’ worth of records dating from April 2012 till the end of 2013.

Sung, former chairman of Keangnam Enterprises, dropped a series of bombshell revelations last week as prosecutors were investigating whether he bilked the government of millions of dollars in investments in overseas resources projects.

After saying he was a scapegoat in the Park government’s probe into overseas resources investments, a signature campaign of Park’s predecessor as president, Lee Myung-bak, in a press conference Wednesday, Sung was found hanged by a necktie from a tree branch on Mount Bukhan Thursday.

Before his apparent suicide, Sung talked to the Kyunghyang Shinmun newspaper about his years of money dealings with politicians. A piece of paper listing eight politicians - almost all key members of the Park’s presidential campaign who later came to serve in top posts in her government - was also found in his pants pocket.

In his diaries, Sung recorded meetings with politicians from both sides of the aisle of the National Assembly, top officials from the government and state-run enterprises, media executives as well as members of the judiciary. He also kept meticulous records of the National Assembly’s plenary and standing committee sessions as well as book publishing events by ruling and opposition lawmakers, which function as fund-raisers in Korean politics.

According to the records, Sung started meeting with Saenuri officials even before the party merged with the minority Advancement and Unification Party on Nov. 16, 2012.

Sung entered politics in 2012 by winning a seat to represent Seosan and Taean in South Chungcheong on the smaller party’s ticket. Although Sung became a lawmaker of Park’s ruling party through the merger, he lost his seat last June due to election law violations.

Sung, who was floor leader of the Advancement and Unification Party, was named vice chairman of Park’s presidential election committee on the day of the two parties’ merger. On the day of the merger, Sung had a lunch with Lee Byung-kee, presidential chief of staff, at a Japanese restaurant, the diaries showed.

On Oct. 30, 2012, Sung recorded that he met with UN Secretary-General Ban and his family. Ban was visiting Seoul to receive the Seoul Peace Prize.

The records also showed that he attended a celebration to congratulate Lee Hae-chan for victory in the chairmanship race for the Democratic Party, predecessor of the NPAD, on June 15, 2012.

Sung also recorded that he met with Hwang Woo-yea, then-floor leader of the Saenuri Party, and Rep. Hong Moon-jong in March 2013. In his interview with the Kyunghyang Shinmun, Sung said he gave 200 million won ($181,406) to Hong and the money was used for Park’s presidential election campaign in 2012.

Lee, the current prime minister, was among the eight people on the list of names, dates and money amounts found on Sung’s body.

“The original of the diaries may include the amounts of money given to them,” a Sung confidant told the JoongAng Ilbo. “Even if the money dealings were not recorded, the diaries can be cross-checked with the memo and the interview Sung gave before his death and the details of the suspicious money withdrawals that the prosecution has investigated so far in order to prove the politicians’ receiving of funds.”

The revelation about the diaries came as the prosecution’s special investigation team formally launched its probe on Monday.

The prosecution made clear Monday that it will not hesitate to go after the truth about campaign funds in the 2012 presidential election.

In his first meeting with reporters, Mun Mu-il, head prosecutor for the special investigation team, said a handwriting analysis showed that the note in Sung’s pocket was written by him. Investigators are now looking into the two mobile phones also found on Sung’s body.

During the 40-minute briefing, Mun said the team will lay bare the truth. “No one can be an exception,” Mun said. “We will thoroughly investigate all charges based on law and principles.”

Asked if the team will investigate the 2012 presidential election campaign funds, Mun said, “We won’t limit the scope of our investigation. When a suspicion arises, we will not think twice and go ahead to investigate it.”

Sources from the prosecution said the diaries will likely expedite the investigation into the scandal. During their earlier probe into Sung’s Keangnam Enterprises, prosecutors already uncovered suspicious money dealings. The company was accused of bilking the government’s investments in overseas resources projects and speculation was rife that Sung had used the money to pay off politicians.

The prosecution raided Sung’s office and home on March 18, 2015, but the diaries were not confiscated. “Sung appeared to believe they were valuable records, so he kept them in a different place,” a Sung aide said.

Oh Byoung-joo, Sung’s lawyer, told the JoongAng Ilbo Monday that he will consult with Sung’s family and submit the diaries to the prosecution.