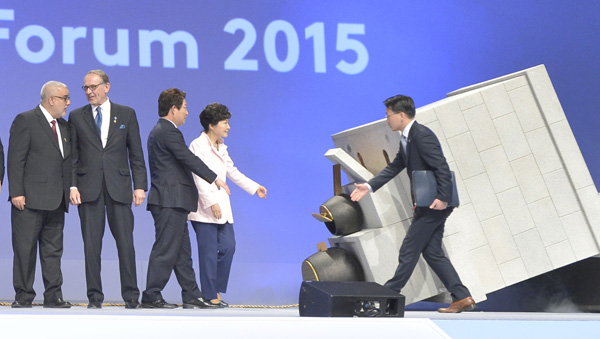 President Park Geun-hye, second from right, inquires about the tipped over water clock on Sunday at the opening ceremony of the 7th World Water Forum, held at the Daegu Exhibition and Convention Center. The replica of a Jagyeongnu, a traditional Korean water clock, was supposed to strike a drum to signal the forum’s start but fell over when the event’s participants, including President Park, pulled the rope to operate it. [NEWSIS]

The organizing committee of the 7th World Water Forum has launched an internal investigation into the cause of an accident Sunday that jeopardized the safety of President Park Geun-hye and other world leaders on stage at the event’s opening ceremony.

President Park and 12 foreign and domestic leaders were gathered on stage Sunday at the forum’s opening ceremony at the Daegu Exhibition and Convention Center for a performance involving a 2 meter (6.5 feet) tall structure built to look like a Jagyeongnu, a traditional Korean water clock invented by scientist Jang Yeong-sil nearly 500 years ago.

The structure was intended to spout the water from the top when prompted, which would then strike a drum to signal the start of the event.

However, the structure abruptly tipped over toward the on-stage guests when they pulled the rope, causing the president’s body guards to spring into action.

No one was hurt in the incident, though news of the mishap quickly went viral, drawing criticism that the organizing committee had not adequately prepared for the performance.

The president later approached the fallen clock to take a closer look.

“We prepared the performance so that it would be a novel experience and also signal the beginning of the forum,” an official on the event’s organizing committee explained. “We are currently investigating the cause of the accident to determine whether the agency in charge of the ceremony or the subcontractor that made the structure is responsible.”

The water forum, which kicked off Sunday and runs until Friday, aims to promote global collaboration on water challenges and mobilize creativity, innovation and expert knowledge.

More than 20,000 people, Korean and foreign leaders as well as officials from international organizations ? are participating in the event.