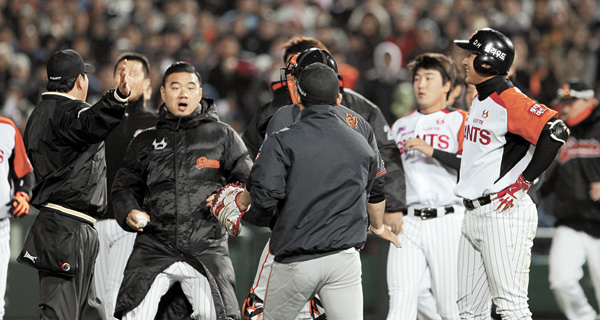 Lotte Giants third baseman Hwang Jae-gyun, right, stares at Hanwha Eagles pitcher Lee Dong-kul in a bench clearing after being hit by a pitch in the fifth inning during their KBO League game at Sajik Baseball Stadium in Busan on Sunday. Provided by Lotte Giants

Lotte Giants’ third baseman Hwang Jae-gyun is known as a man of iron in the Korea Baseball Organization (KBO). The 27-year-old appeared in 450 consecutive games through last season, and has appeared in all 12 games this season.

But Sunday, Hwang could have been broken: He was hit twice by Hanwha Eagles’ pitchers, which could have caused serious injury.

The hits have been the latest controversy for the KBO League, as they caused season’s first bench clearing on Sunday.

At the Sajik Baseball Stadium in Busan, Hwang was hit by Eagles’ pitcher Kim Min-woo in the bottom of fourth inning, and then by Lee Dong-kul in the bottom of the fifth. Although hits can happen accidentally, both throws in this case are suspected to have been “beanballs” - pitches intended to strike an opposing player.

The former Nexen Heroes player walked to first base after his initial hit, but after being hit a second time, Hwang approached the mound, causing a bench clearing on both sides.

Baseball pundits suspect Hwang became a “target” after attempting to steal a base in the bottom of the first inning, when the Giants were leading 7-0 against the Eagles. Hwang’s steal was considered by some to be a breach of the so-called code of baseball, under which a team with a big lead (usually five points or more) by the middle of a game should not steal bases or bunt.

Giants manager Lee Jong-woon said after the game that “Hwang has done nothing wrong, except doing his best in the game,” and blamed the Eagles for playing dirty. Eagles manager Kim Sung-keun claimed that he didn’t order the beanballs. Lee, who was thrown out of the game after tagging Hwang, refused to comment on the incident.

While the Sunday’s hits continue to increase tension between the two teams, Hwang said that he just wants to make sure that nothing like this happens again.

Q. You were struck twice this weekend. How are you feeling?

A. The second pitch hit my hip, so it wasn’t very painful. But the first one was thrown at my elbow, which was dangerous. It could’ve easily broken my arm.

You smiled after being hit by Lee. Why?

It seemed obvious that he was going to try to tag me. So for his third pitch, I moved more front inside the batting box and thought, “Hit me if you can.” But since the ball actually hit me, I just had to smile.

When you were hit the first time, you seemed to give a warning to [pitcher] Kim.

I knew that he was intentionally throwing the ball to hit me. Since he is a young player, I just thought to myself, “It’s not your fault.” But the result was a hit-by-pitch anyway. I thought he should’ve shown more courtesy after throwing such a dangerous ball

Eagles player Kim Tae-kyun calmed you down after the beanball situation. What did he say?

He apologized. He’s also a batter, after all. Tae-kyun told me that he [Kim Min-woo] knows nothing because he is young. If he [Kim Min-woo] had just showed some sign of apology, it would’ve been alright.

The captains of both teams have quarreled about you stealing bases during last Friday’s game, when the Giants were leading by six points. Have you heard anything from the captain or coaching staff about this?

I have heard nothing about stealing bases.

On Sunday’s game, I did steal a base in the first inning, but stealing a base that early in the game, even if you’re leading by a lot, is different than if you were to do the same in the seventh or eighth.

I still don’t know why I was hit by the pitches. If my actions were the reason, I think it’s nonsense.

During the bench-clearing situation, we heard that some Eagles players apologized to you.

I haven’t heard directly from pitchers, but Eagles veterans did apologize. They asked me whether I was alright after I got hit, and during the bench clearing they said they were sorry.

Even after the game, they were apologetic. I don’t think its those players’ faults.

Have you listened to manager Lee’s postgame interview, in which he warned other teams against throwing beanballs?

Manager Lee is always taking care of us. But yesterday he was especially supportive.

It looks like the controversy has gotten bigger. As the player at the middle of this situation, how do you want the issue to be resolved?

Since the [beanball] issue has gotten more attention, I just hope this kind of incident doesn’t happen again. If it does, it will be really bad for both players and the fans.