Yoon stands as a towering figure in handball

Yoon stands as a towering figure in handball 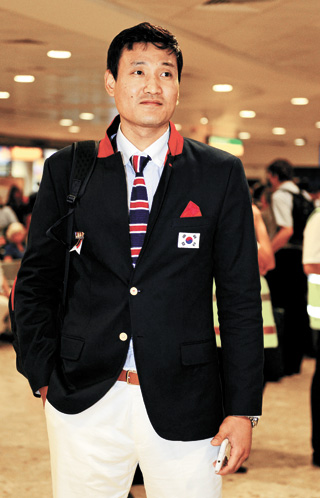 If you think Cha Bum-kun was the only Korean athlete who rocked Germany, you would be mistaken. While Cha lifted Korean pride in football, Yoon Kyung-shin did it with his hands.

The 203-centimeter (6-foot-6) Yoon is the all-time leading scorer in DKB Handball Bundesliga, which is considered the most competitive professional league in the world. Yoon netted 2,905 goals in his 12 seasons with the German league, taking the scoring title seven times.

Born in Seoul in 1973, he first encountered handball in fourth grade at Soongin Elementary School during a special activity class. He recalled being attracted to the size of the ball, which was neither big like a basketball nor small like a baseball.

“With that unique size, I became curious about it and it was interesting that you play with your hands,” Yoon said in an interview with the Korean Culture & Information Service last year.

When he heard there was a handball team at Soongduck Elementary School, Yoon moved there in the fifth grade. By that time, he was taller than his classmates at 160 centimeters.

At Kwangwoon Middle School, the left-hander was 188 centimeters tall. The 41-year-old explained he inherited his height from his parents: His father was 181 centimeters and his mother 170.

“As I was born with a healthy body with strong physique, I wasn’t really behind foreigner players in physical power,” he said. “This may be the reason why I was able to play overseas for so long.”

Yoon was selected to the national team his first year at Korea University High School. The team trained in Germany, and the experience made Yoon determined to someday play there.

By the time he was a sophomore in high school, Yoon stood 2 meters and began to attract international attention as the top scorer in 1990 International Handball Federation (IHF) World Junior Championships. The same year, Yoon was part of the team that won a gold medal at the Asian Games in Beijing, although he wasn’t a regular.

Yoon joined Kyung Hee University in 1992 and experienced his first Olympic Games in Barcelona. The next year, Yoon was chosen as one of the Best 7 players by position as a right back at the 1993 IHF World Championships in Sweden. While professional teams were eager to sign Yoon, he stayed in school to earn his degree.

In 1995, Yoon was the top scorer in IHF World Championships in Iceland and his performance was enough for VfL Gummersbach officials to sign him.

Yoon said the most difficult part of playing in Germany was the language barrier. In his early days, Yoon was seen nodding when conversing with others. His nickname, Nick, is derived from the German word “nicken,” which means “to nod.” 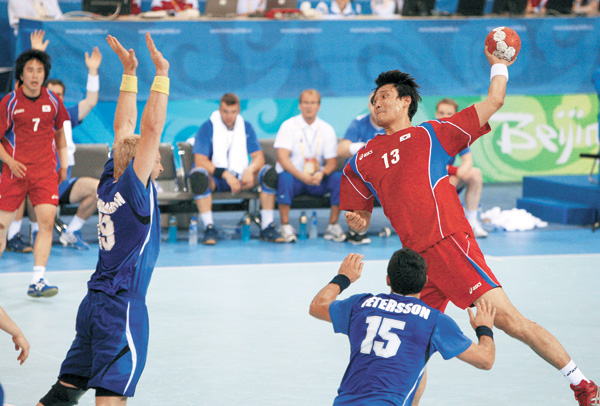 Yoon Kyung-shin shoots against Iceland during the group qualifiers at the 2008 Beijing Olympics. [Joint press corps]

But it didn’t take long for Yoon to become a legend. Starting with the 1996-7 season, he was the league’s top scorer for five out of seven years. The honor went to Stephane Stoecklin in 1997-8 and Lars Christansen in 2002-3. During the 2000-1 campaign, Yoon set the single season scoring record with 324 goals, and he is still the only player to net more than 300 in a season.

Yoon was named 2001 IHF World Player of the Year, becoming the second Korean to receive the award after Kang Jae-won in 1989.

Despite Yoon’s solid performance with Gummersbach, THW Kiel was the dominant team in the league from mid-1990s. But after he moved to HSV Hamburg for the 2006-7 season, the team won the European Handball Federation Cup Winner’s Cup. Yoon was the team’s top scorer.

In his 12 seasons, Yoon played 406 games and netted 2,905 goals. He averaging 7.2 points per game, the best in Handball Bundesliga history.

After the 2007-8 season, Yoon decided to return to Korea. Fans did their best to persuade him to stay and the magazine Der Spiegel printed a six-page special section highlighting Yoon’s career.

“I had 4-year-old son, and my wife also wanted to go back to Korea, so I really thought a lot about returning,” he said. “But in the end, because of my family, I had to return.”

In Korea, he played for Doosan, which proceeded to win three straight league championships from 2009-11 with Yoon as the top scorer.

Yoon has played more than 260 matches for the Korean national team, including five Summer Olympics and six Asian Games, where he won five gold medals.

Other honors include top scorer at the 2004 Athens Olympics and leading scorer in four consecutive Asian Games from 1990.

At the 2012 London Olympics, he served as the flag bearer for the Korean contingent of athletes.

In 2013, Yoon ended his playing career to coach the Doosan club, winning the league title his first year and finishing second in 2014.

Yoon now looks forward to participating in his sixth Olympics, this time as a coach. In February, he was named national team coach for the Rio de Janeiro Games next year. His term runs until the 2018 Asian Games in Jakarta.

“Handball is my life,” he said. “There is still work I need to do with this sport.”