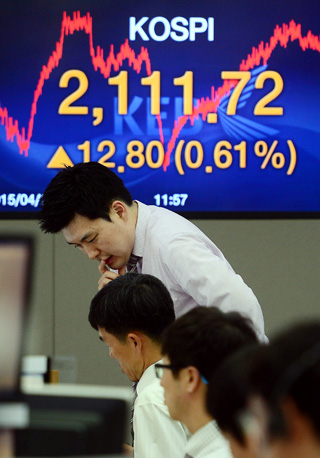 A board at the Korea Exchange Bank in downtown Seoul shows the closing of the Korean primary market above 2,100 on Tuesday. [NEWSIS]

The Kospi broke through the 2,100 mark Tuesday for the first time since August 2011 thanks to a buying spree by foreign investors and positive expectations for improvement in Korean companies’ performances in the first quarter.

The Kospi finished at 2,111.72 Tuesday, up 0.61 percent from the previous day, largely with the help of strong purchases by foreigners.

As the main bourse in Seoul continues a rally based on high levels of global liquidity, pundits predict the index could rise further at least until the U.S. Federal Reserve finally raises interest rates.

Local securities firms are raising their forecasts for the Kospi. Until early this year, negative sentiments about the market dominated with analysts saying that the Kospi would languish below the 2,100 mark, like last year.

But a JoongAng Ilbo survey on Monday showed that such negative views have dissipated and a significant number of analysts are estimating that the stock index will not only exceed the 2,100 level but also hit 2,200 this year.

In the survey of five heads of research at leading securities firms - Samsung, KDB Daewoo, Korea, Shinhan and Mirae Asset - four research heads said the index would reach 2,150 to 2,200 and one predicted it will surpass the all-time high of 2,228.96 of May 2011.

Over the past five years, the Kospi did experience some rallies, but failed to hit the 2,100 mark three times because of sell-offs by retail investors in fund products.

People who suffered losses from investing in funds in 2008 kept withdrawing their money from funds whenever the stock index climbed.

The Kospi rose 6.55 percent for the first three months of this year, but about 3.3 trillion won ($3.0 million) was withdrawn from equity-linked funds during the period.

Retail investors who turned their backs on the local stock market are returning due to the lowest-ever interest rates, which discourage deposit investments in banks. The share of retail investors in the Kospi expanded nearly 10 percentage points to 59.6 percent last week, marking the largest share since July 2009.

“Retail investors had been satisfied with low yields after they experienced huge losses in 2008, but now their interests in stocks have grown with the changing macroeconomic conditions,” said Lee Kyung-min, an analyst at Daishin Securities.

Another obvious reason for the Kospi rally is ample global liquidity. As many as 24 countries have eased their monetary policies this year through quantitative easing measures or cutting benchmark interest rates. Such actions helped boost expectations about economic recovery around the world, sending overseas stock markets to higher levels.

According to Bloomberg, 14 out of 47 stock indexes across the globe hit new highs this year.

The Korean stock market is, in particular, benefiting from the global liquidity.

According to data by the Financial Supervisory Service on Monday, foreigners made a total 4.3 trillion won worth of investments in Korean shares and listed bonds in March, nearly quadrupling from February.

On Tuesday alone, foreigners purchased 390.5 billion won worth of Korean shares, contributing to the Kospi’s rise.

Unlike the upbeat mood in the stock market, however, pessimistic views about the real Korean economy remain. Some say the exuberance of the stock market can’t last long without robust growth in the real economy.

“The domestic economy is still in a sluggish phase,” said Lee Sang-jae, head of investment strategy at Eugene Investment & Securities. “Retail sales growth retreated in the first quarter compared to the final quarter of last year.”

Despite gloomy views about the domestic economy, rosy forecasts that the Korean stock index could reach 2,200 this year are based on rising expectations that Korean companies are likely to announce better earnings in the first quarter.

“The reason why many securities firms are raising their Kospi forecasts is the announcement of Samsung Electronics’ Q1 performance,” said Shin Dong-suk, research head at Samsung Securities.

“As the market bellwether’s performance is expected to improve further, more forecasts are being made that the Kospi would rally even more.”

Such positive growth outlooks for corporate earnings are based on the current foreign exchange rate, which is hovering around 1,100 won against the U.S. dollar and is favorable for many Korean companies relying on exports. Low international oil prices are another positive factor for Korean businesses.