Criticism of meal-delivery apps is food for thought

Criticism of meal-delivery apps is food for thought 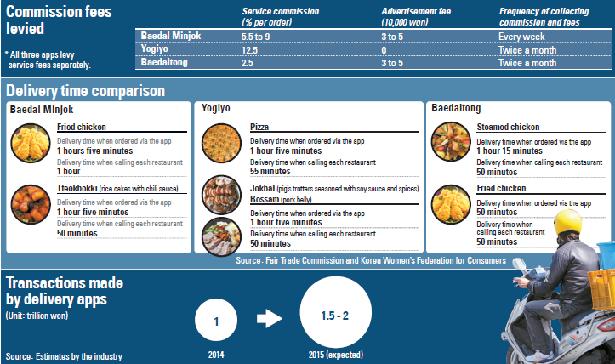 Kim Seong-ah, a 27-year-old fashion designer, loved the idea of ordering food through an app without having to leave her couch.

But she had an unsatisfactory experience with one service six months ago. Her meal from the franchise Nene Chicken, one of the choices on the app she was using, was late and the portion was smaller than what she gets when she orders from the company directly by phone.

When Kim spoke to her friends and her brother, she discovered that they had had similar experiences. She found clues on why from various news articles, which reported that some merchants deliberately provide a poorer service for app users in order to make up for the losses incurred by the fees the platforms levy.

The flare-up over the app-based delivery system is the latest testament to the fact that advanced technology meant to increase convenience can cause unexpected consequences for different parties.

In this case, the controversy stems from the fact that the apps have come up with their own charges without seeking a fair agreement with users and restaurants, critics say.

The merchants are complaining that the current rate is too high, as reflected in a joint survey conducted by the Fair Trade Commission and the Korea Women’s Federation for Consumers earlier this month.

The 14 restaurants polled said they hope the apps reduce their commission fees.

The restaurants pay up to 12.5 percent on each sales transaction, as well as a separate advertisement cost of up to 50,000 won ($45.64) every month and additional service fees.

Yogiyo charges restaurants 12.5 percent commission per transaction, the highest in the market, while the largest player, Baedal Minjok, takes up to 9 percent and Baedaltong expects 2.5 percent.

Yogiyo does not levy a separate advertisement fee, but Baedal Minjok and Baedaltong both charge their clients 50,000 won every month at a maximum.

The service providers say the commission rate is reasonable given that similar app-based services impose rates that are comparable or higher.

“The average rate of major global food delivery applications is approximately 13 percent,” said Sung Ho-gyung, a public relations official at Baedal Minjok, which has the largest number of users out of the three apps.

He also explained that extra services the platform provides for its member restaurants factor in the fees.

“We provide data about consumer behavior and hold sessions about how restaurants can get the most out of the app and other technology infrastructure,” he said.

The joint survey also noted that the delivery service is far from consumer-friendly.

The group’s investigation also found that the average delivery time via these apps was as long as an hour, up to 25 minutes longer than when a customer makes an order directly to a restaurant.

According to the joint survey of 14 restaurants in Seoul - in which two restaurants affiliated with each delivery app were asked to answer questions - delivery time took longer when ordering via the apps compared with calling the restaurants directly.

Restaurants affiliated with Yogiyo and Baedaltong had to pay an extra user fee twice a month, while those with Baedal Minjok paid the additional cost every week. At individual interviews with the consumer federation, many restaurants said they hope the delivery app companies reduce their overall commission costs.

“Most customers of these apps are small restaurants run by owner-operators, who often face their revenue falling severely after paying all kinds of commission to the apps,” said Kim Soon-bok, secretary general of the federation at a press conference held at Sejong Government Complex last Tuesday.

Kim added that this may result in the decline of food quality or the rise of food prices.

The secretary general also pointed out that the delivery apps maintain their high fees because they are useful and can attract many customers to restaurants. Users are drawn in by clever commercials as well as the convenience associated with the services.

“When we held a delivery app user survey, entertainers appearing in commercials were third-highest in the list of factors when choosing an app,” added Kim. “This indicates how highly reliant the delivery app industry is on advertisement models, leading industry members to mostly focus on producing better-quality commercials, rather than enhancing food or service quality.”

According to corporate finance data provided by the industry’s three largest players - Baedal Minjok, Yogiyo and Baedaltong - the companies spent nearly 61 percent of their annual sales on advertising.

The three apps account for 90 percent of the market. And the industry itself is growing briskly, with transactions made by the food-delivery services estimated to be worth about 1 trillion won last year.

But the Korean authorities, known for their tough regulations on online and mobile services, stress that the apps should operate more responsibly.

“The delivery apps provide conveniences to small restaurants when it comes to marketing and advertisement,” said Kim from the consumer federation.

“However, the apps excessively pursue their revenue while avoiding responsibilities. They should take more responsibility.”