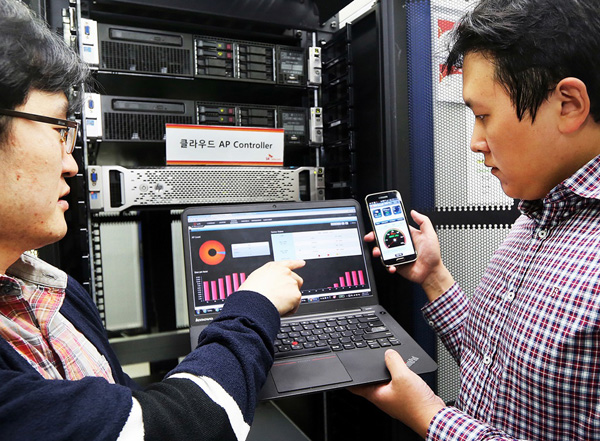 SK Telecom employees demonstrate Wi-Fi virtualization equipment Tuesday known as the Cloud AP Controller or Cloud AC at their office in Borame, southern Seoul. The company says it is the first to commercialize the Cloud AC system in Korea, which creates a virtual server using the remaining capacity of an existing server. The technology eases congestion of Wi-Fi traffic without having to install an additional server. The company added that its Cloud AC has also applied Fast Hand-Over technology. When a smartphone deviates from the Access Point perimeter where Wi-Fi is serviced, video or music streams or an Internet connection is lost. Fast Hand-Over technology quickly searches and automatically connects the smartphone to the nearest Access Point, minimizing disconnections. SK Telecom installed the Cloud AC system at Jeju International Airport on Tuesday and plans to install it in other crowded areas, including Seoul Station. [NEWSIS]