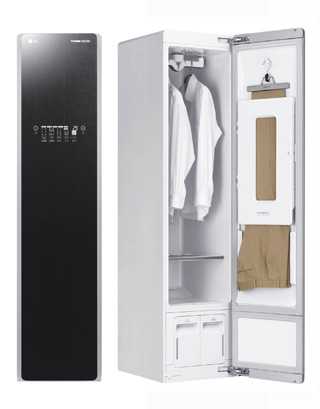 The new LG Tromm Styler. Provided by the company

More than 12,000 units of the upgraded Tromm Styler, an at-home dry-cleaning device, have sold just 100 days after it launched, LG Electronics said on Tuesday. The record is five times higher than the first-generation machine, which was released in 2011.

The Tromm Styler is an unprecedented wardrobe-like consumer electronic product devised for clothing. You hang your items - from blouses to coats to bedding - in the machine and choose the steaming, sterilizing, drying or odor-removal functions. The time it takes for the machine to complete each function varies, but the standard option takes 34 minutes.

Users can also adjust the strength of the steam depending on which type of fabric needs to be treated. LG said 99.9 percent of germs and dust mites are removed from an item after it has been placed in the Tromm Styler.

LG explained that the device is the result of an amalgamation of core technologies from various other electronic goods: steam technology from washing machines, inverter compressor technology that saves energy from refrigerators and air-control technology from air conditioners.

The 2015 edition of the Tromm Styler, which was unveiled at the Consumer Electronics Show in Las Vegas in January, is more than 30 percent slimmer than its predecessor. It now measures 44.5 centimeters (17.5 inches) wide, 58.5 centimeters deep and 185 centimeters high. A few more functions have been added to the new version, such as the ability to maintain the vertical creases on suit pants.

LG Electronics, the nation’s second-largest consumer electronics producer after Samsung Electronics, said that the renewed version of the Styler machine was no easy feat to produce. The company collected opinions and gathered feedback from design professors as well as customers who bought the first device and potential buyers.

The majority of Tromm Styler owners are homemakers in their 30s and 40s, according to LG. They said they opted for the device in order to clean high-quality clothing such as suits, knit sweaters and furs and to avoid using dry-cleaning services or having to do any ironing.

“More frequent outbreaks of yellow dust in Korea seem to have also affected consumers who bought the Tromm Styler,” said an LG spokesman.