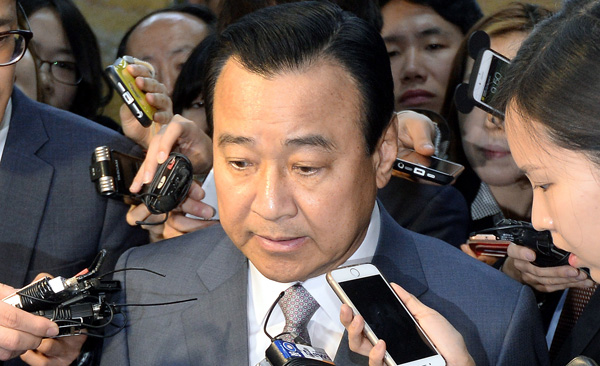 Prime Minister Lee Wan-koo received an envelope stuffed with cash for a 2013 election campaign from Sung Wan-jong, the construction tycoon who claimed before his suicide last week to have paid money to President Park Geun-hye’s inner circle for years, according to Sung’s associates.

They spoke to the JoongAng Ilbo exclusively Tuesday.

“Sung attended the opening ceremony for a new building of the South Chungcheong Provincial Government around 2 p.m. on April 4, 2013,” said a secretary of Sung, former chairman of Keangnam Enterprises and also a former lawmaker, who accompanied the businessman at the time. “Then Sung moved to the campaign office of Lee, whose campaign for the by-election was about to start. At first, Sung and other local politicians entered Lee’s office together, but Lee asked the others to leave and sat down with Sung alone.”

“I know Sung stuffed a yellow envelop with 50,000 won [$45.64] bills,” another key associate of Sung told the JoongAng Ilbo. “Because it was stuffed with 30 million won, I remember that the envelope was quite thick.”

“At the time, local legislators accompanied Sung to Lee’s office, and the prime minister is shamelessly denying having met with Sung,” he said.

At the time of his death, Sung was under investigation for allegedly siphoning off money from government investments in overseas resources projects. He insisted that he was a victim of the Park administration’s vendetta against former President Lee Myung-bak, who promoted so-called resources diplomacy as a signature project while in office.

In addition to giving the interview before his apparent suicide, Sung died with a piece of paper in his trouser pocket listing eight politicians - almost all key members of the Park’s presidential campaign who later came to serve in top posts in her government - along with some money amounts and dates on which the money was apparently handed over.

Prime Minister Lee and Blue House Chief of Staff Lee Byung-kee were on the list but no dates or money amounts were next to their names.

The JoongAng Ilbo also secured copies of diaries in which Sung kept meticulous records of his meetings with politicians. The diaries confirm that Sung visited Lee’s campaign office on April 4, 2013.

After serving as South Chungcheong governor from 2006 till 2009, Lee returned to the National Assembly by winning a seat in an April 2013 by-election to represent Buyeo and Cheongyang counties of South Chungcheong on the Saenuri Party’s ticket. Lee had previously served as a lawmaker from 1996 till 2004.

“I went to his campaign office and stayed half a day,” the audio file of Sung’s interview said. “I gave 30 million won to him. It was an extension of my personal relationship with him. No conditions were attached. I did so by borrowing money from the company.”

In the interview, Sung went on to express his frustration with the prime minister and question his integrity.

Park appointed Lee as prime minister in February after several failed nominations for the top seat in her cabinet. On March 12, Lee issued his first address to the nation and declared a war against corruption.

In the statement, Lee particularly criticized corruption in the defense industry and overseas resources development as well as conglomerates’ custom of creating slush funds and embezzling corporate money. The statement was seen as the government’s green light for the prosecution to go after businessmen such as Sung.

Claiming that Lee is unfit to lead a war against corruption because he is corrupt, Sung said, “He is too greedy. He abuses other people too much. He shouldn’t have to, but he kills many people by using them too much.”

Prime Minister Lee bet his life on his innocence Tuesday. But he refused to step down, although the ruling party made clear that it wouldn’t provide a shield for him.

“If there is evidence that I had taken the money, I will lay down my life,” Lee said during a National Assembly hearing.

Reiterating his innocence, Lee said it was very dangerous to assume that everything Sung said was true simply because he committed suicide.

Lee also said he will accept all investigations including an independent counsel probe. He, however, rejected a demand from the opposition New Politics Alliance for Democracy (NPAD) that he must resign.

After an emergency leadership meeting, Rep. Yoo Seong-min, floor leader of the ruling Saenuri Party, said, “We demand of the prosecution that Prime Minister Lee be investigated first. “If the opposition party demands an independent counsel, we are more than willing to accept,” he said. “The prosecution must investigate Lee speedily and thoroughly and announce the outcome.”

Asked if the ruling party discussed a plan to take legal action to bar Lee from performing his job as the prime minister, Yoo said there was no legal ground to do so. “For the prime minister’s post, you either serve or you step down.”

“Park must say clearly what she will do with this situation in which Prime Minister Lee and Blue House Chief of Staff Lee Byung-kee will face an investigation while they are still in office,” Moon said.

“Prime Minister Lee must go to the prosecution and face an interrogation, instead of showing up at the National Assembly,” said Moon. “Lee told the legislature Monday that he didn’t receive a single coin from Sung, and it only took half a day to reveal that his testimony was a lie.”

Moon said prosecutors must act fast to raid the politicians’ offices and residences because there is a high possibility they will try to destroy evidence.

The NPAD demanded that Park delay a trip to four nations in Latin America. She was scheduled to leave the country on Thursday to visit Columbia, Peru, Chile and Brazil, and the plan had already been criticized because she will be leaving on the 1st anniversary of the Sewol’s sinking, in which more than 300 people died.

“The administration is now facing an unprecedented and explosive corruption scandal, but the president is saying she will leave the country as if it was someone else’s business,” Yoo Eun-hae, spokeswoman for the NPAD. “That is hard to accept.”

The Blue House said Park will leave for Latin America as scheduled.

“The trip is a government promise to other countries and it’s the nation’s business,” said Ju Chul-ki, presidential senior secretary for foreign and security affairs. “Unless there is a special reason to postpone it, it must take place as planned.”