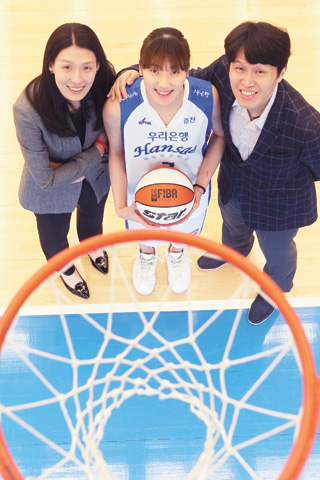 On March 27, Hansae beat the Cheongju KB Stars to claim both the regular season and championship series title for the third straight season.

These days, Hansae coach Wi Sung-woo, assistant coach Chun Joo-weon and championship series MVP Park Hye-jin are used to having their photos taken and being interviewed. They know how to pose for the camera and which angles make them look best.

The two leaders have since developed into a WKBL dynasty. In a group interview with Ilgan Sports, an affiliate of Korea JoongAng Daily on March 30, they said that the team has left the trauma of being at the bottom of the league behind. But in spite of their wins, they said the team still just enjoys playing the game.

Q. This is already your third championship title. How do you feel?

A. Wi: Honestly, I feel little flat. Since we’ve kept winning, the emotions aren’t what they were in our first victory. But winning is, of course, still very exciting.

Chun: I felt similar. I was deeply moved when we won the championship, but just a day later, it was like it’d never happened. But the pride I felt when we won is absolutely indescribable.

Park: When we won, I was really happy. But it is strange - since this was my third time, I wasn’t thrilled like I was before.

The team’s traditional ceremony of stepping on the coach took place again.

Wi: Compared to last year, I think players were going easy on me because I lowered the intensity of training this season.

Last year, maybe because I insisted on rigorous training, they weren’t kidding around when they stomped on me. In our first championship, players were looking to each other to decide if it was actually alright to step on the coach, but last year, I was severely trampled by players.

Though most players this year were more careful, I saw Lee Seung-ah stamping on me with a passion. (laughs)

Park: Coach, that’s not true. We all stepped hard. (laughs)

Some people say without Park, Hansae would’ve had a tough time winning the championship.

Wi: Park and I think differently about this. Last season, Park was a player with a big impact, changing the game rhythm. This season, she was little short on that aspect, but in terms of team contribution, she was the best in the league.

She’s dependable. Scoring more than 10 points in four championship series games isn’t something you can do easily, even if you want to.

Wi: Chun is essential to our team. She made good decisions on problems that I can’t really take care of.

Chun: Because the players are women, there are things that they can’t tell a male coach. For those kinds of issues, they discuss with me. I don’t share all things with the coach, but I do give some hints. Then coach Wi make his own considerations and decisions.

If players only discuss their troubles with Chun, isn’t that little hurtful for you, coach Wi?

Wi: Absolutely not. I think the relationship between a coach and his players should be a little uncomfortable.

Of course, I feel little displeased when players don’t come to me. But at the same time, I’m relieved that players don’t really like Chun that much. (laughs)

Many people talk about Hansae’s rigorous training, but how hard is it really?

Park: In the first year during the offseason, we gathered at 9 a.m. and worked out until 12:20 p.m. In the afternoon, in particularly from 3:20 p.m. to 6 p.m., we trained based on real game situations. The afternoon training is actually not set, so it goes as far as it needs to. My body would shake by the time training was finished.

But during games, I would notice that I’d be moving better and that the team would be performing more effectively as a whole.

Now, we take pride in our training. I hate it when we lose to a team that trains less than us. (laughs)

Wi: That’s in the past. I don’t push players to train as hard as before.


How will you all prepare for the next season?

Wi: For the last three seasons, we produced results. But I don’t know if we are heading in the right direction. Now, we are the “public enemy” that is always challenged by other teams.

I said that I feel little numb about winning the championship, but it’s something that we can’t give up. Of course, we will work hard to defend the top position in the league.