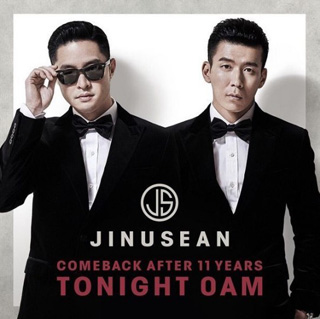 “Tell Me One More Time,” by Jinusean, one of Korea’s iconic hip-hop duos from the 1990s, has topped six music charts, including Naver Music, Monkey3 and Cyworld Music.

The song was released Wednesday at midnight. It has a funky element and combines recent and ’90s-style music trends.

The track is about a guy who wants to get back together with his ex-girlfriend. It was written by Jinu and Sean, the two members of the duo, and Tablo, the frontman of hip-hop trio Epik High. Jang Han-nah, one of the stars produced by audition program “K-pop Star” season 3, features on the song.

The music video takes people back to 1997, with various musicians from that time making cameos in it.

The hip-hop act will perform at the Totozel Super Concert, which will be held at Seoul World Cup Stadium in Mapo District, western Seoul, on April 25.

The hip-hop duo released their last album, “Phone Number,” in 2004. By Jin Min-ji