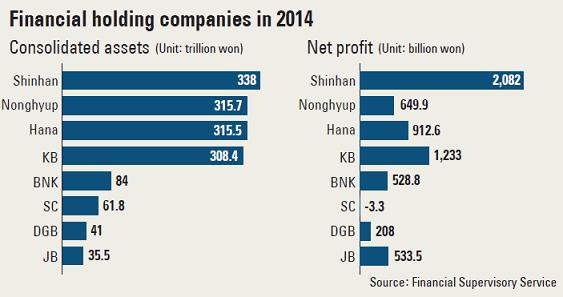 Eight financial holding companies showed improved fiscal soundness and assets in 2014 during a time of questions over the effectiveness of the group system adopted in 2000.

Although Woori, KDB and Citibank decided to abandon the group model, citing inefficiency, the eight financial groups that survived posted higher net profits and increased assets in a difficult environment last year, according to a Financial Supervisory Service report on Wednesday.

Shinhan remains the largest financial group in terms of assets and net profit, followed by Nonghyup, Hana and KB.

Earnings by the country’s bank holding companies more than doubled in 2014 from a year earlier, the report said.

The increase in net profit is largely attributable to a series of securities brokerage and insurance company acquisitions, the report said.

Standard Chartered Korea, the local branch of the London-based financial institution, was the only group that posted a net loss - 3.3 billion won.

The effectiveness of the financial holding group system was called into question 14 years after it was introduced due to an internal conflict at KB Financial Group over changing the bank’s operating system last year.

Unlike initial expectations that the holding company system would help improve transparency and competitiveness by enlarging financial institutions, there has been disruption and delays in the decision-making process at some groups. That has been a drag on actual growth and damaged reputations, said an executive at one of the disbanded groups.

The government introduced the financial holding company system as law in 2000 to increase industry competitiveness after the Asian financial crisis of the late 1990s. Having banking, insurance, securities and credit card businesses under one group was supposed to lead to synergy. The government cited the cases of JPMorgan Group and Citi Group in the United States.

Woori, whose holding company got disbanded and flagship bank is undergoing privatization, was launched in 2001 as the first financial group in the country. The government created the group by integrating five struggling banks.