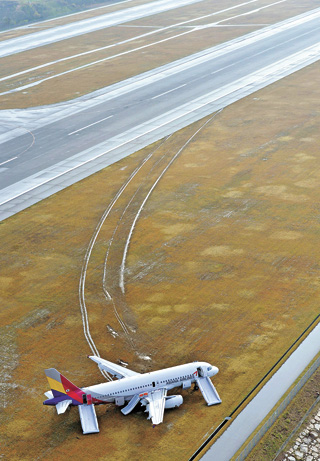 An Asiana Airlines plane sits at Hiroshima airport in Hiroshima Prefecture in western Japan on Wednesday after it landed short Tuesday.[AP/NEWSIS]

According to the Ministry of Transport in Japan, Flight 162 of Asiana Airlines carrying 73 passengers and eight crew departed from Incheon International Airport at 6:30 p.m. and touched down in Hiroshima about 330 meters (361 yards) short of the start of the runway at 8:05 p.m. The Airbus A320 aircraft then veered off the runway, causing its landing gear to collapse and damaging the left engine.

Damage to a wireless communication facility, about 6 meters high and about 300 meters away from the runway, was found, suggesting that the aircraft hit it before landing. An object believed to be an antenna from the communication equipment was found caught in the aircraft’s landing gear, Kyodo News reported, quoting Japan’s Transport Ministry.

“We can’t confirm whether the plane landed short of the runway or not as we are not allowed to by law until the accident investigation is over,” Min Man-gee, a spokesman for Asiana Airlines, one of the country’s two national flag carriers, told the Korea JoongAng Daily. 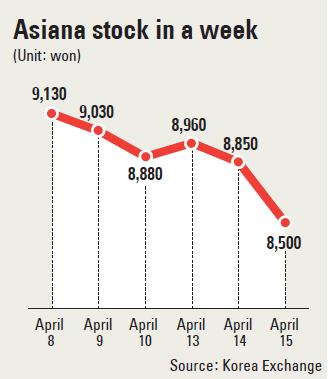 All passengers and crew were immediately evacuated from the plane using an escape slide. Some passengers appeared to have sustained bruises and other light injuries during the evacuation.

Among the 73 passengers, eight were Koreans, 46 Japanese and nine Chinese. The flight also had passengers from the United States, Canada, the Philippines, Russia and Vietnam.

Asiana said the A320 was manufactured in April 2007 and acquired by the company in October of that year. The captain has a total of 8,233 hours of flying time and the co-pilot has 1,583 hours.

The company said Wednesday that a total of 45 people - 37 Asiana employees and an accident inspection team consisting of eight officials from the Ministry of Land, Infrastructure and Transport - headed to Hiroshima at 6:30 a.m. to find the exact cause of the accident. The company added that it will provide tickets for relatives of Flight 162 passengers if they want to go to Hiroshima.

Landing short of the runway recalls the tragedy of July 2013 when an Asiana Airlines Boeing 777 crashed as it approached San Francisco Airport in an accident that killed three teenagers and injured about 180 others. It landed short of the runway because the pilot didn’t fully understand the aircraft’s systems.

A passenger interviewed by Japan’s national broadcaster NHK said, “The plane rapidly lowered its altitude after it shuddered.” Another passenger recalled, “It looked like flames were coming out of the engine and smoke came into the seating area. One passenger on the other side said it was a fire! I thought, ‘This is it, I am going to die.’?”

“We’re very sorry for the passengers and for making the nation worry with this accident,” Asiana said in a statement. “We will try our best help the government cope with the accident.”