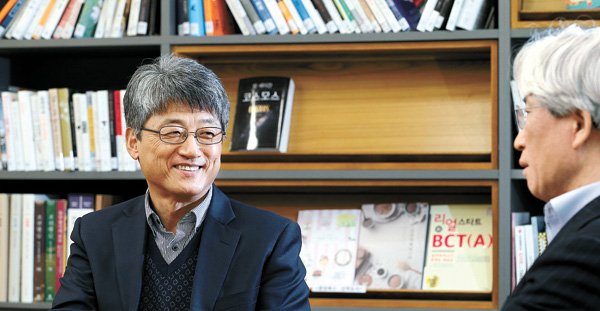 
Suh Sang-hyun, the director of the Korea Research Institute of Ships and Ocean Engineering, highlighted the benefits of connecting a South Korean railway directly to China via a train ferry over the Yellow Sea to make feasible the Silk Road Express.

Suh and Korean novelist and social commentator Bok Geo-il exchanged views on the project - a proposal advocated by President Park Geun-hye that would connect South Korea with Europe via North Korea and China - in an interview earlier this month with the JoongAng Ilbo.

According to Suh, connecting South Korea with the Trans-China Railway (TCR) via a train ferry will enhance connectivity through Asia and Europe, making the Silk Road Express (SRX) possible.

He added that a direct route over the Yellow Sea would be “economical” and avoid dependence on North Korea and its whims.

In February, National Assembly lawmakers participated in a government-sponsored forum touting the Yellow Sea-Silk Road Express initiative, calling for Pyeongtaek Port in Gyeonggi, in western South Korea, to be connected to the Port of Yantai in Shandong Province, eastern China, through a train ferry link.

President Park Geun-hye first announced her vision in October 2013 for the Eurasia Initiative, a plan to boost the regional economy through free trade and economic cooperation in the Eurasian bloc. She also outlined her idea for a Silk Road Express, a railroad that would connect the Korean Peninsula to Russia, China, Central Asia and on to Europe.

South Korea plans to join the Organization for Cooperation Between Railways (OSJD), an organization with 27 members including China, Russia, North Korea and nations in Eastern Europe and Central Asia.

In order to carry out President Park’s Silk Road Express initiative, South Korea must join the OSJD as a formal member - it is currently an affiliate member. Doing so requires unanimous approval by its members - the problem being North Korea.

Since 2003, OSJD has proposed that both Koreas discuss the issue and reach an agreement so that the South may apply for membership.

However, North Korea recently confirmed that it will not attend the OSJD Railway Summit or the 10th International Freight Conference in Seoul, scheduled to take place from May 27 to 29, putting a damper on the possibility of a Silk Road Express.

China, likewise, proposed in March its One Belt, One Road initiative - a key part of President Xi Jinping’s domestic economic and foreign policy - a planned network of road and rail routes, oil and natural gas pipelines, and other infrastructure projects connecting central China, Central Asia, and ultimately reach as far as Moscow and Europe.

“Ultimately, what is most important is to secure a number of general transportation routes,” Suh said. “That’s how we can be free from the influence of oil countries. A Yellow Sea train ferry can satisfy such a larger strategic picture.”

The research institute, founded in 1973, became an affiliate of the Korea Institute of Ocean Science and Technology last year and focuses on shipping technology, maritime accident response, underwater robot and maritime equipment technology, among other areas.

Below is an edited excerpt of Suh’s responses to questions posed by Bok.

Bok: The SRX project is a splendid plan. However, the project is so massive and international, it’s riddled with problems. The most obvious problem is that the railway passes through North Korea. The North Korean railway is aged, so in reality, there’s the issue that a new one would need to be constructed, and North Korea’s political unrest and hostile attitude creates even more problems. As an alternative, what do you think of a railway over the Yellow Sea from Korea to China, as has been proposed before?

Suh: A Silk Road Express that will connect South Korea with Europe ultimately needs to access a Eurasian railroad network. Of such railroad networks, on the far east is the Trans-Siberian Railway, and west of that are three routes that cross China. These are the Trans-Manchurian and Trans-Mongolian railways, as well as the Trans-China Railway that passes through China and central Asia. Someday, our railway will connect to all of these railways.

However, giving weight to China’s rapid development, the route will definitely be one that is centered around the TCR. Compared to the other routes that pass through Siberia, the TCR passes through densely populated parts of China, so it is economically advantageous.

Accessing the TCR through North Korea is rather inefficient. The route will take a long detour, passing through North Korea’s Sinuiju, going around the Manchurian western coast and coming down again to central China. A railway ferry will cross directly over the Yellow Sea. The distance will be much shorter and it will be more economical.

Bok: It’s clear a Yellow Sea ferry express is more economical, but isn’t an even clearer perk that this method will avoid the influence of North Korea and enable the project to be managed with more stability?

Suh: That’s right. Until now, with the [inter-Korean] Kaesong Complex, our companies and government faced so many difficulties because of North Korea’s outrageous attitude. Even now, North Korea unilaterally proposed raising workers’ wages, so we are again in a difficult situation. Should North Korea come up with an excuse to block the railway, we will be put in a tough position. If the SRX Yellow Sea ferry connects [South Korea] straight to the TCR, those concerns will be irrelevant.

Does the Chinese government also embrace the idea of a Yellow Sea ferry?

Suh: The Chinese government is even more assertive than our government because this would be helpful for the success of its ambitious Trans-China Railway. In 2002, our Construction and Transportation Ministry and China’s Railways Ministry agreed to push for a train ferry project. China in early 2011 chose Yantai Port in Shandong Province, and Korea several months later chose Pyeongtaek. Yantai’s provincial government afterward showed great interest.

Bok: In the upcoming OSJD meeting that convenes in Seoul, South Korea seeks to become an official member of the OSJD. But the North said it will not participate, so Seoul’s membership looks like it will be delayed. .?.?. The Yellow Sea ferry connecting us to the TCR seems to be a good countermeasure to North Korea’s uncooperative attitude.

Suh: Definitely. Plus there is the advantage of avoiding the enormous cost and time needed to reconstruct North Korea’s railway. China already expanded its railroad routes to Germany. From now - should we go ahead proactively - within two to three years, a Yellow Sea train ferry that connects with the TCR can be built.

But even if all other conditions are favorable, rebuilding North Korea’s railway would take at least five years. Even if our relationship with North Korea improves, an SRX that stops in North Korea cannot be built in less than 10 years. Our logical choice is clear.