Calls for PM to resign spread to ruling party

Calls for PM to resign spread to ruling party 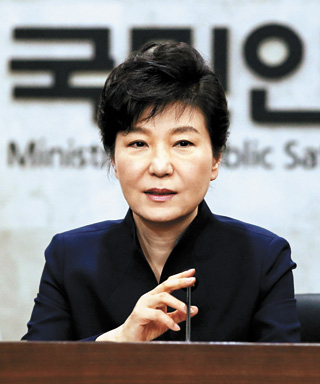 The fate of Prime Minister Lee Wan-koo hung in the balance on Wednesday as the opposition party completed a legal review to push forward with his dismissal amid snowballing allegations that he accepted bribes from a late construction tycoon.

Associates of Sung Wan-jong, the former chairman of Keangnam Enterprises as well as a former lawmaker, told the JoongAng Ilbo on Wednesday that Lee received 500 million won ($4,558) from the businessman in 2012 for his book-publishing event.

The accusation was the latest in the series of revelations linked to Sung, who claimed before his suicide last week that he had paid money to President Park Geun-hye’s inner circle for years.

According to Sung’s aides, the businessman attended Lee’s ceremony on Jan. 6, 2012, in Hongseong, South Chungcheong, shortly before the legislative election in April that year. In Korea, book-publishing events are often used to get around political fund-raising limitations. 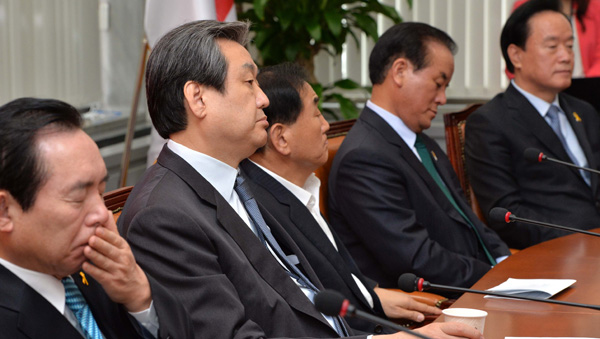 Leaders of the ruling Saenuri Party hold a meeting Wednesday in the office of Saenuri Chairman Kim Moo-sung, left, at the National Assembly to deal with bribery allegations surrounding Sung Wan-jong. [NEWSIS]

“Sung attended the event and paid 5 million won,” a key Sung associate told the JoongAng Ilbo. “Cash gifts at a book publishing event are legal, but Sung paid more at Lee’s event than to any other politician.”

“Sung kept a record of his payments to those politicians, including cash gifts for book events,” another Sung associate told the JoongAng Ilbo.

While the prime minister has denied having close ties with Sung, the businessman died with a piece of paper in his trouser pocket listing eight politicians ? almost all key members of the Park’s presidential campaign who later came to serve in top posts in her government ? along with sums and the dates on which the money was apparently handed over.

Lee’s name was on it, but without any other details.

However, evidence suggests their friendship went deeper than what the prime minister has stated. According to the diaries Sung recorded, he held 23 meetings with Lee from August 2013 until last month.

Aides to Sung also told the JoongAng Ilbo earlier this week that Sung gave 30 million won in cash for Lee’s campaign in the 2013 election.

Hours before his death on April 9, Sung participated in a telephone interview with the Kyunghyang Shinmun in which he elaborated on his years of financial dealings with politicians, including the prime minister. Sung described Lee as “greedy” and “corrupt” when mentioning the 30 million won.

On Wednesday, the prosecution’s special investigation team into the late tycoon’s bribery said it had obtained a transcript of Sung’s 50-minute interview. The newspaper has so far only released excerpts.

After serving as South Chungcheong governor from 2006 to 2009, Lee returned to the National Assembly, winning a seat in an April 2013 by-election to represent Buyeo and Cheongyang counties in South Chungcheong on the Saenuri Party’s ticket. Lee previously served as a lawmaker from 1996 to 2004.

Shortly before the April 2012 legislative election, Lee was diagnosed with multiple myeloma, a form of cancer, and did not run. After eight months of treatment, he made a successful political comeback, returning to the legislature after the by-election and going on to become the ruling party floor leader.

President Park appointed him as prime minister in February after several failed nominations for the top seat in her cabinet.

“New allegations were uncovered recently, and we must rectify them this time for the sake of political reform,” President Park said on Wednesday. “I will not tolerate anyone who is responsible for corruption and irregularities, and the public won’t forgive them. We must use this opportunity to completely lay bare all problems from the past to reform our politics.”

Park continued that the country would have no future if nothing was immediately done to correct past wrongdoings. Her remarks came as she attended a government meeting to address the anniversary of the tragic sinking of the Sewol ferry, which cast new light on long-held cozy relations between the business community and authorities. “We must build a truly transparent Korea,” Park said. “I want everyone’s firm commitment that they will push forward reform, with no concessions under any circumstances.”

The main opposition New Politics Alliance for Democracy (NPAD) said Wednesday it was ready to introduce a motion to recommend that President Park dismiss the prime minister.

“We have completed our strategic review,” NPAD Rep. Jin Sung-joon said. “Once the leadership makes the decision, it’s just a matter of choosing a date.”

“The goal is not just submitting the motion, but to force him to resign,” Jin said. “Even if he resists, President Park will face a heavier political burden once the legislature approves the motion.”

A motion to recommend the dismissal of the prime minister can be introduced to the National Assembly when more than one-third of sitting lawmakers support it.

While the NPAD has no problem introducing the motion, it does not have enough lawmakers for its passage. The legislature currently has 294 lawmakers, with the ruling Saenuri Party occupying 157 seats.

However, the main opposition maintained that the prospect was promising, as some Saenuri lawmakers have expressed the need for Lee to step down. “If just 14 of them attend the vote, we have a chance,” an NPAD official said.

Until now, eight motions to dismiss a prime minister have been introduced to the National Assembly, though only three have ended up in a vote, and all were shot down.

“It’s over for the prime minister,” said NPAD Rep. Jung Chung-rae. “In fact, the Park administration is done.”

Senior members of the Saenuri Party also applied pressure on the prime minister to voluntarily step down.

“Whether the accusations are true or not, he must resign out of political responsibility,” said Saenuri Rep. Lee Jae-oh. “Park has two deputy prime ministers in case of this situation.”

He added the party must take action if Lee insists on remaining.

The demands to sack the prime minister have created a dilemma for Saenuri leaders, who held a meeting to discuss the prime minister’s fate, but with no conclusion. “There can be different opinions and I will listen to them carefully,” Saenuri Chairman Kim Moo-sung said.

He continued that the ruling party would not avoid an independent counsel investigation targeting the prime minister if the prosecution’s investigation was unsatisfactory.

The National Assembly grilled Lee for another day on Wednesday, while NPAD lawmakers continued to pressure him to step down. Lee refused.

“I am not close to Sung, but I have always thought he was peculiar,” Lee said. “I even advised my fellow lawmakers to be wary of him.”

As Lee spoke, lawmakers from the opposition party jeered at him.

“Lee can’t say such things unless the prosecution is briefing him about the probe,” an NPAD lawmaker said.