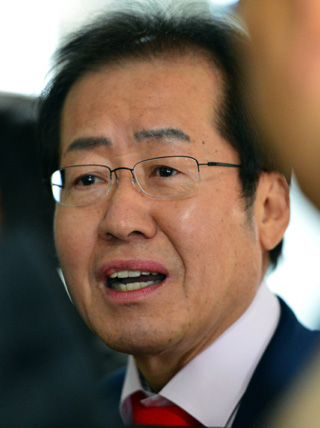 South Gyeongsang Governor Hong Joon-pyo, one of the Saenuri veterans embroiled in a far-reaching bribery scandal impacting both the administration and the ruling party, said that he would fully cooperate with a prosecutorial investigation into allegations that he received kickbacks from a late businessman.

On his way to his office in South Gyeongsang on Wednesday, Hong said it was unlikely to believe his testimony. The former Saenuri chairman has been accused of accepting 100 million won ($91,300) in bribes from the late Sung Wan-jong, the former chairman of Keangnam Enterprises who was found dead last week.

The businessman died with a piece of paper in his pocket listing eight politicians - almost all key members of Park Geun-hye’s presidential campaign who eventually served in top posts in her government - along with the sums and the dates on which the money was apparently handed over.

“Would people believe what I say here in denying these allegations?... The truth will be revealed in the prosecutorial investigation,” Hong said.

However, he rebuked heightened demands from the opposition that he step down, saying it wasn’t “right for an elected official to decide on such a matter without thorough prudence,” and noting that he had handled provincial affairs without incident despite the scandal.

The controversy, which has since consumed the entire political arena, erupted after Sung dropped a series of bombshell revelations last week as prosecutors were investigating whether he may have cheated the government of millions of dollars in investments in overseas resources projects.

The business tycoon was found hanging by a necktie on Mount Bukhan on April 9. In the note found on him, 100 million won was written next to Hong’s name.

Suspicions that Hong may have gotten kickbacks from Sung snowballed after Hong had hinted that the businessman may have attempted to deliver the money to him during his bid in the 2011 Saenuri party primary, when he ran for its top position. Still, he raised the possibility that a middleman was likely to have extorted the money rather than handing it off to his camp.

The alleged middleman, Yun Seong-mo, a former journalist, alluded in interviews with local media that he had given money to Hong’s delegation, an accusation the governor has strongly denied.

Yun added that Hong should know where the money went, sparking speculation that the governor had pocketed the money.

In a Facebook post on Tuesday, the South Gyeongsang governor claimed he briefly met Sung around the party primary in June 2011, in which he was elected party leader, but since then had neither seen nor talked to him.

“Yun, whom the press is labeling as my confidant, is not, actually. He was one of Sung’s confidants,” said Hong, though he mentioned that Yun did support his campaign in the 2011 primary.

Hong is likely to be the first politician to be summoned by prosecutors in the coming days amid what pundits argue is a scandal so big it could force the Park Geun-hye administration into an early lame-duck period.

The ongoing controversy has also dealt a blow to Hong’s political ambitions. He aimed to run for president in 2017, using his experience as governor as a springboard.