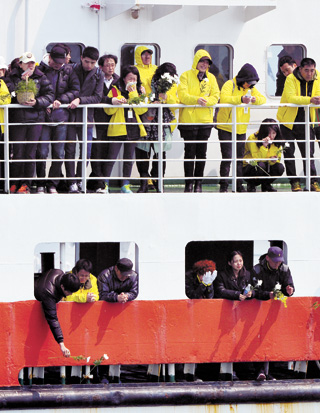 Relatives of the victims of the Sewol ferry accident throw flowers on Wednesday into the sea near Gwanmae Island in Jindo County, South Jeolla, where the ship went down a year ago with 304 passengers and crew members.[NEWSIS]

Last April 16, a ferry called the Sewol was on its way to Jeju Island from Incheon with 476 people on board, mostly high school juniors on a school trip. After a sudden turn off the southeastern coast, the ship listed and then drifted in the sea for nearly three hours.

The Sewol’s captain told passengers to stay in their cabins until a rescue team came - as he and some other crew members abandoned ship without telling anyone else to flee.

Only 172 people got off the Sewol before it totally capsized and then sunk. The other 304 people went down with the ship. In months of searching, the remains of 295 passengers and crew members were recovered from the shipwreck at the cost of the lives of two divers. Nine victims are still unaccounted for.

The accident stunned the country and it triggered the notion that its approach to safety must change - along with its tolerance of corruption, collusion and greed. It prompted Koreans to look at how its society works - and wonder whether the tragedy would lead to any meaningful changes. 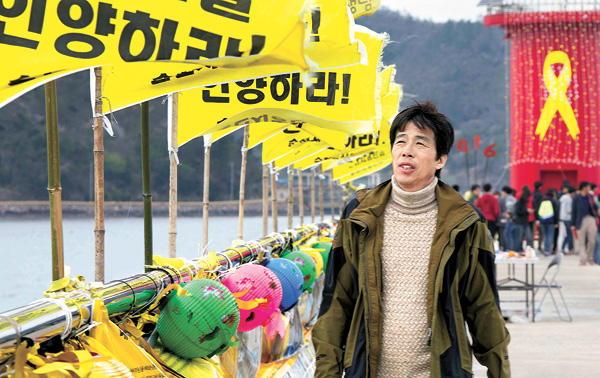 Choi Tae-hyeon, who lost a nephew in the Sewol’s sinking, stays at Paengmok Harbor although the boy’s body was found last May 4. He says he will go home after the government announces its decision to salvage the ship. [JoongAng Ilbo]

A year has passed and changes are hard to find.

When asked what he feels a year later, Kim Seong-wuk, who lost his daughter Cho-won in the accident, answered “distrust and resentment toward the government.” Kim’s daughter was one of 11 teachers from Danwon High School in Ansan, Gyeonggi, who died. The dead and missing include 250 11th graders from the school.

“The day the ferry accident occurred was her birthday,” Kim told the Korea JoongAng Daily on Wednesday. “Tomorrow is her birthday and the government has done nothing over the past year to make our lives safer.”

The Sewol lies on the sea bed off Jindo County, and relatives of the victims and civic groups are staging an ongoing protest rally at Gwanghwamun Square in central Seoul, 24/7, crying out for hard facts on the root causes of the tragedy, including the government rescue effort that rescued so few. One of their demands is for the Sewol to be raised, an arduous and expensive process, to at least recover the remains of the nine people still missing.

Some 200 other relatives went to Paengmok Harbor in Jindo County, South Jeolla, the closest mainland port to the accident scene, to take part in a memorial ceremony. Relatives of nine missing people who have camped out at a nearby gym for the last year also attended.

“My son, I still miss you even after a year,” said a relative at the ceremony. “We are sorry because we were not good parents to you.”

The relatives also went to sea where the Sewol lies beneath the waves. Seeing three buoys indicating the location of the wreck, the relatives burst into tears, threw chrysanthemums into the sea and cried out the names of their loved ones.

After the full horror of the accident and cowardly rescue attempt became apparent last spring, President Park Geun-hye and her government promised to overhaul the country’s emergency management culture and crack down on the kind of corrupt connections between businesses and government officials that led to the overloaded and illegally renovated Sewol to set sail that day.

But a new Ministry of Public Safety and Security has some of its key positions vacant. A new anti-graft law is missing a key element to prevent government employees from pursuing personal interest.

A special investigation committee tasked with finding out exactly what happened to the doomed ferry hasn’t even started its investigation. A decision on salvaging the wreck of the Sewol has also been delayed.

A survey done by the JoongAng Ilbo on 1,000 adults earlier this month found that people do not feel they are living in a safer environment.

In February, 106 cars piled up on the Yeongjong Bridge in Incheon in foggy weather, killing two and injuring 73. The police later said the New Airport Highway did not recommend drivers reduce their speeds by 50 percent as it was advised to by the Korea Meteorological Administration.

In January, three adjacent apartment buildings in Uijeongbu, Gyeonggi, were engulfed by a fire that began when a man used a cigarette lighter to remove a key frozen in a motorbike’s ignition in a parking lot. The fire killed five and injured more than 100. A total of 372 people from 289 households lost their homes. It was regarded as a case that exposed a loophole in the regulations: The buildings used flammable materials as insulating material. Only buildings that are 30 stories or higher are required to use flame-resistant insulating material.

On May 19 last year, President Park Geun-hye made a tearful statement.

“I promise that the government will root out abnormalities of the society and reform public offices to eradicate corruption,” Park said.

One of the key reforms was the Ministry of Public Safety and Security, which was established last November. Park blamed the Coast Guard for the totally botched rescue operation and ordered the organization to be disbanded and folded into the new ministry.

Room 514 is the office of the head of the ministry’s Special Disaster Management Office. Room 514 was locked with a note “Vacant seat” plastered on the door when a reporter from the JoongAng Sunday visited last week. “It’s been an empty room for five months,” a government employee explained, “because a new chief hasn’t been appointed yet.”

The Special Disaster Management Office is in charge of managing accidents in specific categories, such as aviation, energy, chemicals, telecommunication and infrastructure. The ministry has been looking for foreign experts for the position without success.

According to a document submitted to lawmaker Park Nam-choon of the main opposition New Politics Alliance for Democracy (NPAD), six out of 15 high-level positions in the ministry are still vacant.

The bill that would sentence people who cause major accidents with massive casualties to 100 years in prison, which was proposed after Park’s statement, is still pending at the National Assembly. It was discussed once by the Legislation and Judiciary Committee in July.

“The bill was on the table once as a bill related to the accident,” an official of the committee explained, “but it has fizzled out as lawmakers of both the ruling and opposition parties lost interest.”

The so-called Yoo Byeong-eun law, named after the patriarch of the family that controlled the Sewol ferry - who died in still unexplained circumstances while on the run from the law last June - was passed by the National Assembly in November. It allows the government to punish people who conceal financial gains made through crimes.

According to the bill, non-family members or a third party can be subject to legal punishment including seizure of property if they are found to have helped business owners gain profits through business malpractices.

But it was never used against Yoo after his skeleton was found in June in Suncheon, South Jeolla. And many legal experts believe it will eventually be deemed unconstitutional for violating property rights. Apparently some lawmakers felt it was unconstitutional, too, but they passed it anyway.

“The bill was passed because the president and Justice Minister repeatedly asked for it, when everyone knew the bill’s effectiveness was questionable,” said Legislation and Judiciary Committee Chairman Lee Sang-min of the NPAD. “We approved the bill, although we were all aware that it will actually have no effect. It was a deception to mollify an angry public.”

The Sewol accident also reignited discussion of an anti-graft bill named after the former chairwoman of the Anticorruption and Civil Rights Commission, Kim Young-ran. The law is set to be implemented next year. It is supposed to prevent public officials and their spouses from receiving bribes or doing unlawful favors.

But it is missing one of its original key elements, which is to prohibit government officials from taking part in projects that involve their relatives. The former chairwoman has said the law named after her isn’t complete without it.

“The government has taken some measures after the Sewol ferry accident, such as reorganizing government offices,” said Lee Jae-eun, a public administration professor at Chungbuk National University. “But it is still doubtful whether Korea has become a safer country.”

On the first anniversary of the Sewol tragedy, the most controversial issue is the ordinance proposed by the Ministry of Oceans and Fisheries for the special investigation committee.

The committee is an independent, nongovernmental investigative body that was launched according to a special Sewol law that was legislated last November.

The purpose of the committee is to find out the truth behind the accident and possible corruption or negligence by the government and to contribute to even safer environment.

The prime minister handed appointment certificates to the members of the investigation committee on March 5, but it hasn’t begun its investigation because of the controversial ordinance.

The ordinance states that the ministry will put some high-level public officials in some key posts of the committee.

The committee held a press conference Wednesday and called for the government’s cooperation.

“The special investigation committee was established according to the special law enacted in November, but we can’t start because we don’t have the organization nor the necessary budget,” said committee Chairman Lee Suk-tae. “We demand the President and the government clearly announce a schedule and details of the organization.

“We also demand the ministry retract the proposed ordinance.”

The victims’ relatives have complained that the government is delaying a decision on bringing up the sunken wreck.

They say salvaging the ferry will possibly find the remains of the nine missing people and also give more specific evidence as to what really happened in the accident.

A governmental task force reviewing the salvage proposal postponed an announcement that was supposed to be made in late March.

Subsequently, the task force announced it is technically possible to salvage the ship, adding that a key issue was whether to set it upright first or hoist it up as it is.

Victims’ relatives believe that bringing it up bow-first could lead to remains being washed away.

“We needed more time because it’s said that bringing up the wreck as it is might bend the hull,” said Lee Kyu-yeul, head of the task force and an honorary professor at the Naval Architecture and Ocean Engineering Department of Seoul National University.