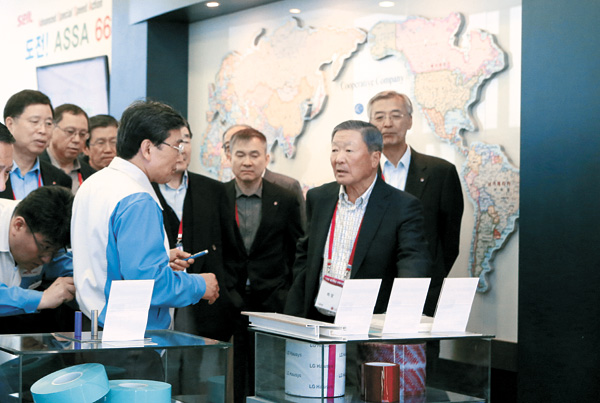 Two months after LG opened its center for creative economy and innovation in Cheongju, North Chungcheong, Chairman Koo Bon-moo vowed on Thursday to open 25,000 LG-owned patents to the public to further support smaller enterprises and start-ups.

At the center’s opening ceremony earlier in February, he promised to provide 27,000 patents for free. The decision Thursday has since propelled the number of LG’s public patents to 52,000.

Koo made the announcement while revisiting the creative economic center, launched and operated in collaboration with the Korean government, with 30 LG executives to check in on business proceedings.

Under the leadership of the Blue House, the government has set a goal to open 17 creative economic centers nationwide, teaming up with domestic companies and conglomerates.

The executives accompanying the chairman included his younger brother and LG Electronics Vice Chairman Koo Bon-joon, as well as the top managers of LG Chem and LG Display.

The LG chairman emphasized “mutual growth” when he sat down with the managers and researchers from the companies supported by the center, and inquired about their progress and future plans.

“Innovation can be much better achieved through mutual cooperation than on your own,” he told the audience. “Small- and medium-size enterprises and start-ups should benefit from practical support so that they can grow and achieve good results.”

Nara M Tech’s Managing Director Chung Sung-sik told Koo that his company could use six free patents from LG Chem for battery pack cases for an energy-saving plan when developing its products. Thanks to those free patents, he said, revenue for related products is expected to more than double next year.

“I hope the cooperation between a large company and its smaller counterpart can spread further,” he added.