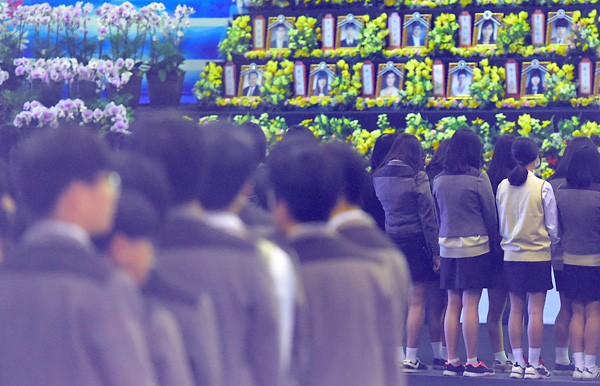 Students from Danwon High School in Ansan, Gyeonggi, pay their respects on Thursday at a mourning altar for the victims of the sunken Sewol ferry in commemoration of the anniversary of the disaster. [NEWSIS]

After the Sewol ferry sank off Korea’s southwestern coast a year ago, leaving 304 passengers and crew dead or missing, the government placed the blame on the ship’s operator and the businessman behind the company, vowing to hold the responsible parties accountable.

Chonghaejin Marine Company, the ship’s operator, and Yoo Byung-eun, the enigmatic billionaire turned fugitive behind the business, were immediately pinpointed by authorities as culprits, leading the shipping tycoon to go on the run in what led to one of the country’s most extensive manhunts.

Yoo was found dead in a field in Suncheon, South Jeolla, following weeks of raids and searches on his estates, businesses and the residences of his friends and associates.

The government’s objective, however, was clear: All necessary expenses to deal with the accident and its aftermath would come from the assets the late tycoon had accrued over years from shady business deals. 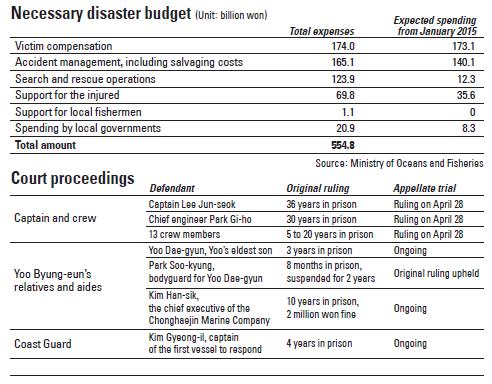 “One business’s greed and personal interests has damaged the lives and properties of the people,” President Park Geun-hye stated in an address about a month after the disaster. “Their profits will be retrieved and used to compensate the relatives of the victims.”

A joint investigation into the accident concluded that the tragedy occurred as a result of numerous illegalities undertaken by the operator, specifically the Sewol’s questionable remodeling, which allowed the ship to carry more cargo and thereby undermined its stability.

After the accident, the prosecution and the Ministry of Justice scrambled to trace and seize Yoo’s assets, including those hidden under the names of relatives and acquaintances.

On Tuesday, nearly a year to the day since the tragedy, the ministry announced that the assets secured so far from Chonghaejin Marine and the Yoo family amounted to 168.8 billion won ($155 million).

Those assets include land in Seoul, 224 apartments in Anseong, Gyeonggi, shares of Yoo’s Semo Group affiliates, including the ferry’s operator, and savings in Yoo’s name and those of his associates. Ships under Chonghaejin Marine Company have also been taken.

But in handling the aftermath, there are still several hurdles to overcome, both in terms of cost and compensation and legal proceedings.

The actual amount the government receives in the end could be far less than the current total, with the creditors of some of those assets putting them up as collateral.

Auctioning off others is also likely to lower the value.

The Ohamana, a similar vessel owned by the Chonghaejin, failed to receive bids four times and was eventually sold in a fifth auction for just 2.8 billion won ? far less than its estimated value of 10 billion won.

Taking these considerations into account, the government is expected to redeem significantly less than the seized 168.8 billion won, far from the disaster’s necessary budget, which the Ministry of Oceans and Fisheries says is about 554.8 billion won.

“The government has spent 185.4 billion won so far, mostly on the search and rescue mission,” Oceans and Fisheries Minister Yoo Ki-june said earlier this month. “Total spending including compensation for the relatives of the victims and the salvaging of the ship will be more than 550 billion won.”

With the total value of secured assets some 160 billion won at most, the government will likely fall short by more than 400 billion won, a prospect that has the Justice Ministry scrambling to secure more money from Yoo and his businesses.

“We are reviewing a plan to secure insurance money to be paid to the Chonghaejin Marine Company for the Sewol ferry,” a Justice Ministry official said.

Another key issue in the ongoing investigation is legal proceedings for those responsible for the massive loss of life, including the captain and crew members who abandoned the ship, and the Coast Guard for its failed rescue effort.

The prosecution is currently trying to bring back one of Yoo’s sons and his daughter to Korea for investigation.

Sewol Captain Lee Jun-seok, 70, was sentenced 36 years in prison for negligence that resulted in death and violating the safety act, though the prosecution’s murder charge was not accepted.

The ferry’s chief engineer Park Gi-ho was convicted of murder, however, for leaving behind an injured crew member and escaping the ferry. He was sentenced to 30 years in prison.

Lee, Park and 13 crew members who fled the ship without evacuating its passengers are currently involved in appellate proceedings. A ruling is expected April 28.

Captain Kim Gyeong-il, who was operating the Coast Guard vessel that first arrived at the accident scene, was also given four years in prison, with the court ruling that he had been professionally negligent for failing to issue evacuation alerts at the scene which subsequently resulted in fatalities. His trial in the appellate court is ongoing.

Yoo’s daughter, Seom-na, 49, and son Heok-gi, 43, are the prosecution’s most recent targets. Seom-na, who was detained in Paris, was due for extradition back to Korea, though the appellate court quashed the ruling and sent it back to the original court.

The International Criminal Police Organization is currently pursuing Hyeok-gi, though he remains at large.