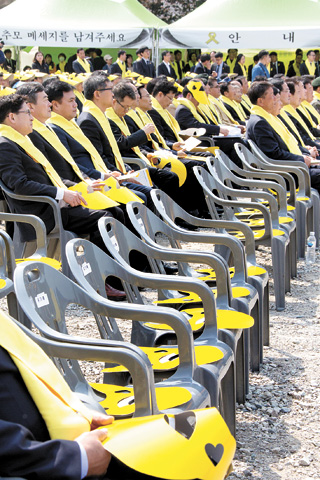 Many seats in the front row are vacant as family members of dead and missing passengers from the sunken Sewol ferry boycott the memorial on Thursday, April 16, the first anniversary of the disaster, when President Park Geun-hye attended the memorial held at Paengmok Harbor in Jindo County, South Jeolla. The central government conducted the memorial despite the absence of the victims’ family members. By Oh Jong-chan

President Park Geun-hye went to Paengmok Harbor in Jindo County, South Jeolla, Thursday to meet relatives of victims of the Sewol sinking and deliver a speech commemorating the loss on the first anniversary of the tragedy.

But the relatives, furious with the Park government’s handling of the tragedy and its aftermath, refused to meet her or hear her speech.
Hours before the president arrived, relatives of the Sewol victims shut down a memorial altar and left Paengmok Harbor to protest the administration’s indifference to their plight - and what they are convinced are efforts to undermine an investigation into the sinking to cover up the government’s role in the tragedy and the botched rescue mission.

All the relatives left the scene after shutting down the altar.

Their cold shouldering illustrated a deep distrust by the families with the administration, which they suspect is trying to jeopardize the independence of a yet-to-be launched investigation committee.

Standing before the vast sea at the port and accompanied by cabinet members, President Park promised her government would raise the ferry Sewol from the floor of the sea during her speech at the harbor Thursday.

“I think we should find ways in earnest to salvage the ferry,” said Park, dressed in a black suit. “The government will move swiftly to lift the sunken ship.” 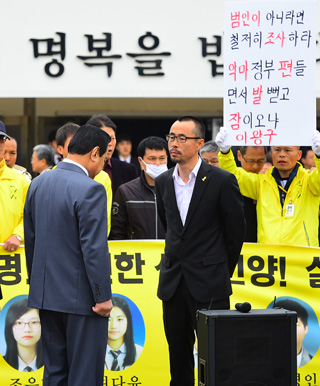 The president also vowed to provide compensation to the bereaved families to ease “their suffering,” adding that the government has been working hard to assist them through doling out emergency relief.

In regard to the nine victims still missing, Park promised the government would work hard to bring their remains back to their families.

In her remarks, she likened her own experience of losing her parents in assassinations to those of the parents of the children who perished a year ago.

Park lost her mother in 1974 by a Japanese-Korean who attempted to kill her father, but instead shot the former first lady during a ceremony marking the Liberation Day. Her father, military strongman Park Chung Hee, was killed by his longtime aide during a dinner five years later.

“Reflecting on my own life, I am very well-aware of how painful it is to lose family members, how long-lasting the suffering is.”

In what was seen as a comment on ongoing demonstrations by the victims’ relatives who accuse the government of meddling in the special investigation about to be launched, Park called on the families to return to their normal lives.

“Pain works to deprive one of hope and makes one’s life harder to live,” she said. “We need to stand up again to live our lives.”

While Park’s words were conciliatory in tone, the relatives chose to embarrass her by boycotting the speech. Park could not pay respects at the memorial altar set up at the port or meet with any relatives to console them.

The victims’ families have been at odds with the Park government over the issue of salvaging the ship, which they desire, and the handling of the special investigation. Last summer, Kim Young-oh, the father of a Danwon student who died in the ferry, staged a 46-day hunger strike demanding a special investigative team independent of the government.

The discord spiked after the government announced an ordinance governing the special committee doing the investigation. Under the ordinance proposed by the maritime ministry last month, high-ranking government officials will occupy key positions on the committee. Relatives of the victims say that is almost guaranteed to undermine the independence of the committee.

Park’s decision to embark on a 12-day visit to Latin America on the first anniversary of the sinking compounded the sense of mistrust, with critics pointing out that such a move would only deepen the impression that she was indifferent to the suffering of the relatives.

Park’s visit to Paengmok Harbor on Thursday was her third since the accident.

In another ugly display, Prime Minister Lee Wan-koo was turned away by relatives Thursday morning at a memorial altar in Ansan, Gyeonggi, where the students lived, as he tried to lay a wreath before portraits of the students.

Chun Myenog-sun, president of a group representing the students’ relatives, demanded Lee clarify his position on the issues of the government ordinance and the salvaging of the sunken ship. Lee replied he would try to take into account the relatives’ wishes on the ordinance through legal procedures, an answer that did not satisfy the families.

But Moon Jae-in, chairman of the opposition New Politics Alliance for Democracy, was allowed to pay respects Thursday morning at the memorial, shedding tears. Moon has been a strong advocate for the victims’ families since the sinking. He even joined a hunger strike and called on the government to accept the families’ demands.

“We have not even launched an investigation even though a year has passed since the Sewol sinking,” said Moon. He said discovering the truth had fallen victim to political wrangling.

On President Park’s leaving the country on an overseas trip on the anniversary day, Moon said, “The timing is inappropriate.”

He continued, “It is a time for the president to share the pain and console the families of the victims.”