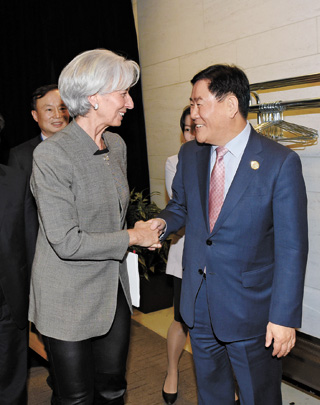 Choi met with the IMF head on Thursday, local time, in Washington, the Finance Ministry said in a press release Friday. Choi is in the United States to attend meetings of the Group of 20 finance ministers and central bank governors. The World Bank and IMF also are holding regular meetings.

Choi brought up the issue of overhauling voting quotas and wide-ranging governance reforms agreed on at the 2010 G-20 summit in Seoul. The measures were intended to preserve the voice of emerging countries, according to the IMF.

Approval of the measures requires an 85 percent share of IMF votes, and the United States holds about a 17 percent share. Although it has been more than four years since the reform plan was announced, the U.S. Congress has not yet approved it.

To effectively respond to instability in financial markets, the Korean minister stressed the importance of macroeconomic measures, the ministry said.

Both leaders agreed on the necessity of boosting international partnerships for a stable global finance industry, such as developing a safety net, according to the ministry.

After meeting with the IMF head, Choi met with his Australian counterpart, Joe Hockey, and signed a memorandum of understanding for Korea to contribute $2 million over the next four years to establish the Global Infrastructure Hub. The hub will act as a networking platform and clearinghouse for G-20 member countries to share ideas and information.

The hub’s first board meeting will be at the G-20 summit during the finance minister’s trip.