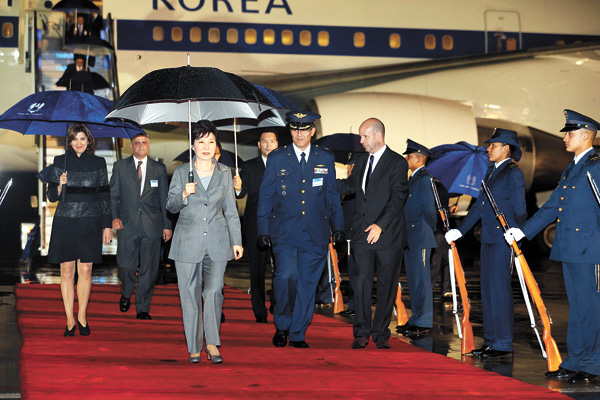 President Park Geun-hye arrived in Colombia on Thursday, local time, as part of her efforts to expand economic cooperation with the far-away region.

Bogota is the first stop on her four-nation visit to Latin America.

After attending a commemorative ceremony for the victims of the Sewol ferry sinking on the first anniversary of the disaster Thursday morning, Park departed for Bogota.

Park aims to expand Korea’s e-commerce business in Colombia, which has a high demand for home and Internet shopping, according to Ahn Jong-beom, the senor presidential secretary for economic affairs.

“A historic problem for joint trade has been the geographic distance between Latin America and Korea,” said Ahn at a Blue House briefing Friday. “The most effective way we can overcome this is by boosting e-commerce. We expect the president’s trip to Colombia will build a bridge for the e-commerce business [into the region].”

Park is to sign a total of 17 memorandums of understanding with Colombia. Fifteen are related to business issues.

Urging Colombia to finalize the free trade agreement is also one of Park’s goals, according to the Blue House.

A final version of the free trade pact between the two countries was signed in February 2013 but has not been officially announced. Korean authorities say that while Korea has finalized everything on its part, Colombia has yet to complete certain legal procedures.

According to the Blue House, between Friday and Saturday, Park is scheduled to attend a business forum between businessmen and economic authorities from the two countries, as well as a bilateral summit with Colombian President Juan Manuel Santos.

She will also meet with Korean residents in the country, as well as Colombian veterans who participated in the 1950-53 Korean War.

Colombia is the only Latin American country that dispatched its soldiers to aid South Korea during the 1950-53 Korean War, according to the Blue House.

After meeting with the veterans on Saturday, Park will fly to Peru and stay there until Tuesday. Between Tuesday and Thursday, she will visit Chile. Brazil will be her final stop, until April 25. She will return to Seoul on April 27.