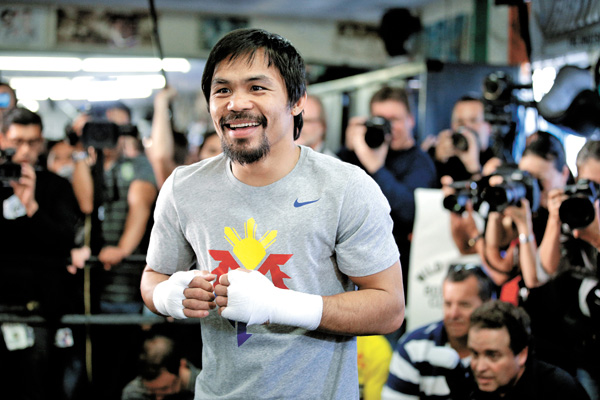 Manny Pacquiao, of the Philippines, smiles during a workout Wednesday in Los Angeles. Pacquiao is scheduled to fight Floyd Mayweather Jr. in a welterweight boxing match in Las Vegas on May 2. [AP/NEWSIS]

LOS ANGELES - Manny Pacquiao intends to put on a show when he faces Floyd Mayweather Jr. in two and a half weeks.

He really hopes Mayweather is also coming to fight, for the fans’ sake - and maybe for his own strategic purposes as well.

Pacquiao radiated confidence and excitement Wednesday at the Wild Card gym in Hollywood before his latest workout in preparation for their bout May 2 in Las Vegas.

With the most anticipated fight in recent years looming closer, both boxers kept their public comments mostly respectful this week. But Pacquiao laughed when told that the defense-minded Mayweather had called him “a very reckless fighter’’ on Tuesday.

“Reckless fighter? That’s how people like me and love me, because they like an exciting fight,’’ Pacquiao said. “We call this boxing, [and] boxing is more punching. We talk about punching.’’

Pacquiao (57-5-2, 38 KOs) has rarely skimped on excitement during his remarkable career as an eight-division champion, but the Filipino congressman realizes he is facing the greatest defensive fighter of their era. Mayweather (47-0, 26 KOs) has been nearly unhittable for most of his opponents during his perfect career.

But Pacquiao hopes Money realizes that the best way to get paid is to put on a fight worth seeing. After all, they’re counting on fans to pay a record $99.95 for the pay-per-view, a figure described by no less than Pacquiao promoter Bob Arum as “ostentatious consumerism’’ if a fan bought it to watch all by himself.

And if Pacquiao is trying a bit of psychological trickery, it isn’t very subtle: He didn’t even try to hide the fact that a brawl would be his best chance to win.

Unlike Mayweather, Pacquiao knows what it’s like to be knocked out and to get back up. Pacquiao lost both of his bouts in 2012 and ended his fourth fight with Juan Manuel Marquez face-down on the canvas in the sixth round.

Pacquiao took time off after that bout, but returned to the ring and won three more fights before Mayweather finally agreed to get in the ring with him, five years after fans first called for the matchup.

Yet the former knockout machine hasn’t stopped an opponent since November 2009, when he finished Miguel Cotto in arguably the greatest performance of his career.

This fight has captured the full attention of Pacquiao, who has found time to actually study film of Mayweather during his chaotic life among his entourage, his large family and his congressional duties.

Trainer Freddie Roach hasn’t seen Pacquiao watching film of his opponents in years, yet Pacquiao came to him with ideas and plans for the fight. Pacquiao is clearly a student of Mayweather’s techniques, even doing a serviceable impersonation of Mayweather’s famed shoulder roll to entertain Roach.

“I haven’t really seen him have this much speed and power in a long time,’’ Roach said. “My chest hurts really bad right now. You can see how much it means to him. He lives for these huge moments, and he knows what this fight means. Floyd is in trouble.’’

Pacquiao confirmed his eagerness to make the fight happen, pointing out that he agreed to every term proposed by Mayweather over the past several years of intermittent negotiations. Pacquiao also agreed to a 60-40 split of the proceeds.

“If my concern is myself alone, I don’t [think of] the fans,’’ Pacquiao said. “Then the fight, it’s hard to make happen. Because of course, I don’t want to take 60-40, a disadvantage and everything. I agreed with that for the sake of the fans. I agreed to make the fight happen.’’

Pacquiao also said he felt a virtual duty to make a possible nine-figure payday resulting from this bout to further his charitable work in the Philippines, where he plans to give away a significant portion of his cut.

“I cannot see them being hungry and not helping them,’’ Pacquiao said. “I’m not materialistic. ... I have to use it for the glory of the Lord, and also for my family and for helping people.’’