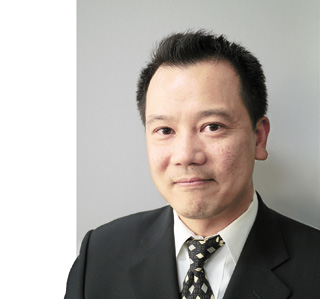 Samsung Electronics has impressed the industry by introducing a lot of “firsts” in its new flagship Galaxy S6 and S6 Edge smartphones, including the Exynos 7420 mobile processor that was developed in-house instead of Qualcomm’s Snapdragon 810.

But Wayne Lam, a principal analyst with IHS Technology, predicts the decision may backfire in the second half of the year to place the world’s No. 1 smartphone producer in the uncomfortable position of having to decide whether to rely on Qualcomm again after Apple places an order for its next-generation A9 chips, which will be made by Samsung.

“Currently Samsung is the only foundry producing 14-nanometer [nm] mobile processors. That’s a risk because Samsung also signed on Apple as a customer. Apple is going to go with whoever has the latest technology,” he said Wednesday in an interview with Korea JoongAng Daily in Seoul.

Taiwan Semiconductor Manufacturing Company (TSMC), Apple’s supplier of A8 processors for the iPhone 6 and iPhone 6 Plus, won’t be able to achieve 14-nm processor technology until later this year.

The products Apple anticipates launching this year - based on the next iteration of the chip likely to be designated the A9 - will require at least nine months of testing, said Lam. “Their only choice is Samsung,” he said.

Samsung’s partner Globalfoundries is supposed to ramp up production by the third quarter to handle demand from Apple and Samsung. But if the Santa Clara, Calif.-based semiconductor foundry fails to execute, as it has in the past, Samsung would have to produce its own, which could strain capacity in the second half.

“Samsung would have look into alternative designs and that’s why there’s a possibility it could fall back on Qualcomm,” said Lam. “Introducing the first of anything is a challenge, technologically.”

A nanometer is a measure of the size of connections within a chip and the lower the number, the more advanced the technology. That allows chips to be smaller, more powerful and energy efficient. A 14-nm processor consumes 35 percent less power and boasts 20 percent enhanced productivity compared with a 20-nm chip.

Lam also predicts there will be at least an update to the iPhone 6 and 6 Plus - something like iPhone 6S and 6S Plus - this year, and Apple may introduce an iPhone 7 with new user interaction features, such as the “force touch” technology introduced in the MacBook and Apple Watch, though that is pure conjecture.

The principal analyst, who was a semiconductor engineer and later earned an M.B.A. from Marshall School of Business at the University of Southern California, has consistently commended the innovative features of the Galaxy S6 and S6 Edge and the timing of Samsung’s decision to debut the cutting-edge phones.

“This is a critical time for Samsung. Samsung needed revitalization of its flagship smartphones and the timing for S6 was really impeccable,” he said. “With the S6, Samsung finally reached the point where it has a very beautiful design, which is interesting because that area was pretty much monopolized by Apple. True competition, at least in aesthetics, is on.”

Earlier on Wednesday, IHS released a report showing that while the S6 Edge is the most expensive Galaxy S line smartphone ever produced, it retails for less than a comparable iPhone 6 Plus. An S6 Edge with 64 gigabytes of storage costs $290.45 to manufacture, compared with $240.05 for the 64 GB iPhone 6 Plus. The paper is based on a teardown of an S6 Edge purchased from Verizon.

“Overall, [the S6 Edge] is the priciest Samsung Galaxy S series bill of materials to date,” said Andrew Rassweiler, senior director of research and analysis for IHS. “Samsung seems to have consistently packed more features and cost into its flagship Galaxy S line of phones over the past three generations of the product, now producing a bill of materials cost that is notably higher than comparable iPhones.”

With the launch of the S6 and S6 Edge, the combined market share of Apple and Samsung in the high-end smartphone market, which stood at 65 percent last year, will probably approach 75 percent in the near future, said Lam, adding that Samsung has reached the point where it has to realize it should concentrate on a specific product segment when competitors in the lower-end segment challenge its global leadership. He cited the example of China’s Xiaomi, whose business model is very disruptive, not minding a slim margin and focusing on cutting costs.

Samsung signaled a move in that direction in March at the Mobile World Congress, where it showcased the S6 and S6 Edge.

“You can see the theme behind their product announcement was much more concentrated,” said Lam. “In the past, they would have dozens of devices and services. This time around, it was purely about design, about how unique the product line was.”