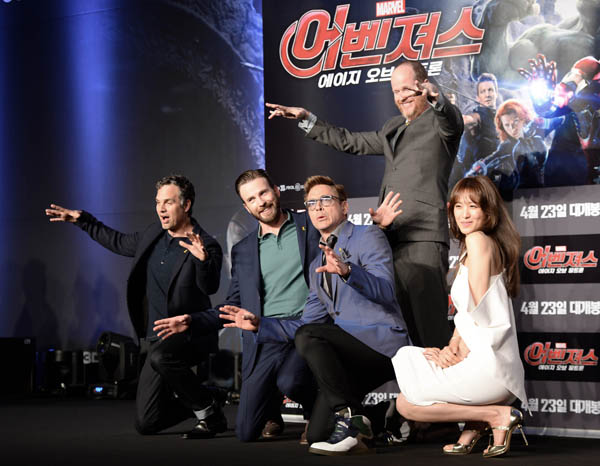 The director and the main actors of “The Avengers: Age of Ultron” pose for a photo at a press event on Friday held at the Conrad Hotel in western Seoul. From left, Mark Ruffalo, Chris Evans, Robert Downey Jr., director Joss Whedon and actress Kim Soo-hyun. The film opens nationwide on Thursday. [NEWSIS]

Amid the immense hype around Marvel’s latest superhero movie “The Avengers: Age of Ultron” its director and a few of its main actors visited Seoul to promote the film ahead of its release here next Thursday.

Along with Robert Downey Jr., who has made several visits to Korea, director Joss Whedon and actors Chris Evans, Mark Ruffalo and Kim Soo-hyun joined a press conference held Friday in the Conrad Hotel, western Seoul.

Seoul is the first stop for the Avengers troupe’s promotional world tour in Asia.

“Hello, I love you. We have to wrap this up quickly because I have a lot of shopping to do,” said Downey Jr., showing his usual goofy personality.

“I am very pleased from the first ‘Iron Man’ when we came to Korea and we really knew that the film was working internationally and I just love the people and the fans and the food,” he said. “I’m jealous that Chris has gotten to shoot here a few times. I am going to be here to film something pretty soon.”

The “Avengers” sequel is highly anticipated among Korean fans — with 75 percent of presale seats already snatched up ahead of the release next week — partly because scenes from the movie were shot in several places across Seoul last year. It was the first time for a considerable portion of a Hollywood blockbuster to be filmed in Korea.

Downey Jr. also acknowledged the significance of the city inside and outside of the movie.

“It was not just the convenience as far as the travel plans go. It was our first stop in the world tour,” he said.

Joss Whedon, who has directed the “Avengers” series since its first installment, said he still remembers holding an audition here in Seoul, where he cast Korean actress Kim Soo-hyun as Dr. Helen Cho, a close acquaintance of “Iron Man” Tony Stark.

“I still can’t believe such an opportunity was given to me,” said Kim. “My biggest priority was to blend in naturally with the other actors.”

For the second in the Avengers series, Whedon said he focused on building up the characters on top of the flashy action scenes the franchise is famous for.

“My main focus was to do better than the first time and spend more time with these characters — get to know them better,” he said.
He added that he mostly wanted to find out more about the characters, “and let these guys have fun together being together.”

Mark Ruffalo, who plays the Hulk, also revealed his excitement about coming to Korea for the first time.

“Annyeonghaseyo,” Ruffalo greeted in Korean. He added that he really enjoyed eating Korean barbecue the day before.

The 47-year-old American actor rose to prominence in Korea when he starred in “Begin Again,” which was a mega hit here last year.

Prior to the press event, 20 minutes of scenes from the film were unveiled to reporters where it showed Black Widow (Scarlett Johansson) and Captain America (Chris Evans) racing their way through the buildings at the boulevards of Gangnam District in southern Seoul.

It also introduced a set of newcomers to the franchise, Aaron Taylor-Johnson and Elizabeth Olsen, who play the supernatural twins Quicksilver and Scarlett.

The sequel will have Ultron (James Spader) as the evil character, who was invented to help humankind but uses his artificial intelligence and physical strength for malicious purposes.

Attendees of the press conference were scheduled to attend a red-carpet event Friday evening at SETEC in Daechi-dong, southern Seoul.

The film is slated to open on Thursday, a week earlier than its U.S. release on May 1.