Former homeless help others get off the streets

Former homeless help others get off the streets 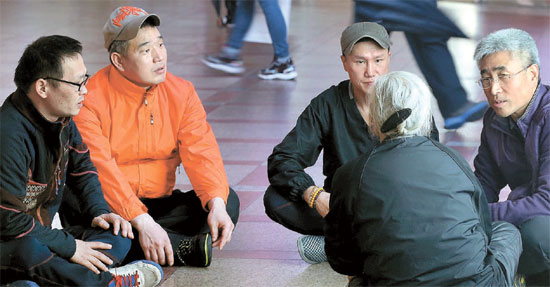 They talk to the homeless and take the ones who have problems to the hospital. They mediate in their arguments or conflicts.

Often called “senior” or “sir” by people in the area, Yun Song-min, Lee Seong-ho and Lee Yeong-il have been taking care of the homeless around the railway station.

One reason they choose to do the job is because they have also experienced the homeless life.

The 41-year-old Yun came from Yeosu, South Jeolla, to Seoul when he was 21. His friend later stole all his money, leaving him on the streets. Although Yun tried to begin his own business after landing a job, he eventually ended up returning to his former status.

Ten years later, after seeing volunteer workers providing free food, Yun decided to get back on his feet. The next day, he found a temporary job and raised money, got married and eventually had a daughter, Bo-bae, who was born five years ago.

“After settling down, I began to think about other homeless people,” Yun said. “I began talking with them to help them improve their lives.”

These people like to tell their stories, mostly about when they were young, according to Lee Seong-ho, another volunteer and former homeless person.

The 47-year-old Lee said he found the destitute were elated just to have someone listen to them.

“I met a former CEO who once owned a huge factory and a parent whose son runs a small company, but this parent chooses to live on the street so that he doesn’t pressure his son,” Lee said.

Lee Yeong-il, who came to Seoul 10 years ago, always tells the homeless to get a job. He said after getting a room with money earned from temporary jobs at a construction company and a moving company, he found how important it was to have work.

“Even if you get a small job, it can be a good motivation,” the 44-year-old Lee said.

The trio, known as “senior homeless,” not only help the destitute but they also help social workers do their job, especially by persuading the residents of the street to receive government aid.