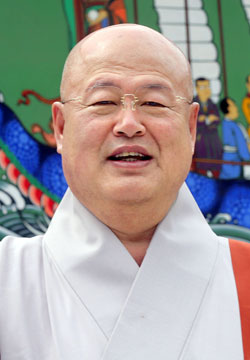 Buddhist Monk Won Gyeong has worked for the past 21 years to collect every single record concerning his father, Park Hon-yong - a Korean independence activist, politician and Communist activist - scouring libraries nationwide and even visiting a few in the United States and Russia.

His collection so far contains nine volumes of books on his father’s life, as well as a comic book in which he reproduced the story.

Park (1900-1956), who led a number of anti-Japanese movements, created the left-leaning Workers Party of South Korea, or Namrodang, in 1946, afterward fleeing to North Korea to evade U.S. forces in the South.

In the North, he served as a cabinet member in the Kim Il Sung regime, but was later executed after being accused of spying.

The 74-year-old monk, Park’s only son in South Korea, has published four volumes of comic books on how he followed his father’s life this year. He plans to publish two more by the end of this year.

Won Gyeong turned to Buddhism when he was a teenager and was elected last year as a senior member of the Chogye Order. In January, he received the Daejongsa, the highest class in Buddhism.

“I hoped the public, including youngsters, can access the story easily,” the monk said in a telephone interview with the JoongAng Ilbo.

About 200 experts, including Yim Kyeong-seok, a history professor at Sungkyungkwan University, participated in producing the comic book, which was drawn by artist Yoo Byeong-yoon.

In South Korea, Park is still known as the leader of the Workers Party and a criminal who had a hand in triggering the 1950-53 Korean War. Being cautious of that, the book mostly dealt with his anti-Japanese movements.

“I was careful concerning the ideological issues, so I didn’t include his story following Japan’s colonization of Korea,” the monk said. “Of course, I thought about writing more, but there’s not much data after he fled to the North.”

Still, there is the possibility that the son of such a controversial historical figure could be criticized for glamorizing his father’s life.

“I’ve never thought of doing so,” Won Gyeong said. “History is history. It is up to scholars and readers to make their own judgments.”

He added that he plans to complete publication of the newest comic book by July 19, the anniversary of his father’s death. “It’s coincidental that politician Lyuh Woon-hyung was shot on July 19 and my father was executed .?.?. on the same day nine years later,” he said. “Again, nine years later, Korean President Syngman Rhee passed away.”

“There are few researchers who study my father’s life,” Won Gyeong continued. “I think it’s my duty to collect the data and let people know the man who gave life to me.”