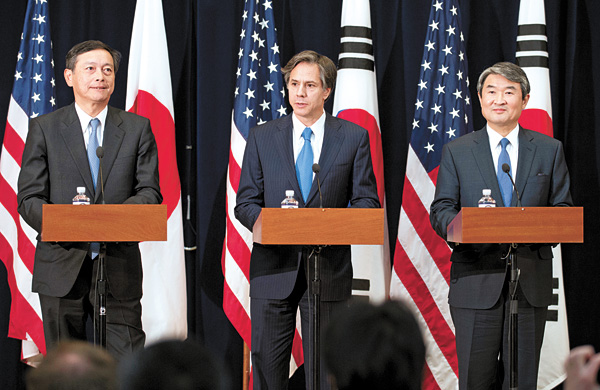 Seoul and Tokyo’s struggle to overcome tensions over historical issues was at the crux of the first vice foreign ministerial trilateral meeting and joint press conference hosted Thursday by Washington aimed at boosting three-way security and economic cooperation.

Korean Vice Foreign Minister Cho Tae-yong said Seoul is taking a two-track approach to relations with Japan, holding a “consistent and principled position” on historical issues while seeking cooperation with Tokyo in areas that are mutually beneficial, namely the North Korean nuclear issue.

“We agreed to expand the R.O.K.-U.S. and U.S.-Japan bilateral cooperation on global issues and also actively seek ways to enhance trilateral cooperation,” Cho said at the press conference, held at the U.S. Department of State, with his American and Japanese counterparts.

The unprecedented meeting among the second-highest diplomats from the three nations comes as Japanese Prime Minister Abe is set to visit the United States at the end of the month.

Cho noted that this year marks the 50th anniversary of the normalization of relations between Korea and Japan.

“We’re not mediating between Japan and the Republic of Korea,” U.S. Deputy Secretary of State Antony Blinken said at the press conference. “We’re simply encouraging our closest friends to have the strongest possible relationship because it matters to us.”

Blinken added that a strong trilateral relationship can enhance the “ability to tackle together the many challenges we talked about” and emphasized that the allies share fundamental principles like “human rights, democracy, access to free and fair markets and the paramount importance of rule of law.”

Japan’s new Diplomatic Bluebook released this month deleted a phrase that said Tokyo and Seoul “share fundamental values such as freedom, democracy, and respect for basic human rights,” a clause included up to last year in its annual foreign policy report. Despite Washington’s insistence that it is not an official mediator for Seoul and Tokyo’s diplomatic troubles, U.S. President Barack Obama facilitated a trilateral dialogue in March 2014 with President Park and Prime Minister Abe along the sidelines of a nuclear summit in The Hague.

Washington took the initiative on the three-way meeting due to the fact that the two Asian leaders have neglected to hold direct talks due to soured relations - a situation exacerbated by the fact that Tokyo has yet to issue a sincere and official apology for its coercion of tens of thousands of women, many of them Korean, into frontline military brothels during World War II.

In response to a reporter’s question on historical issues between Seoul and Tokyo, Japan’s Vice Foreign Minister Akitaka Saiki said, “Japan is a responsible member of the international community. We have squarely faced history, OK?”