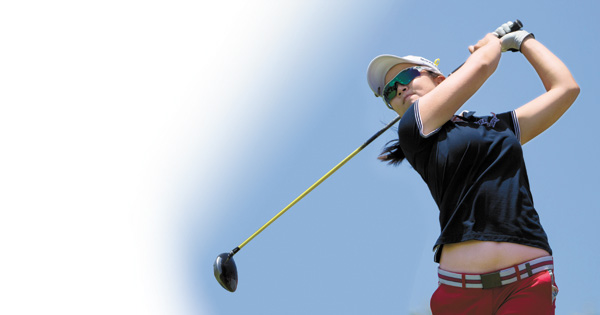 KAPOLEI, Hawaii - Kim Sei-young holed out from 154 yards for an eagle to win the LPGA Tour’s Lotte Championship on the first hole of a playoff Saturday with Park In-bee.

Her third most memorable shot might have come on the 18th in regulation. Moments after sinking a sneaky par putt on 17 to stay even with Park, Kim hit her drive into the water.

“I saw the ball go into the hazard and I thought, ‘What have I done to deserve this fate?’’’ Kim said. “Then the gift came right back after that. I still can’t believe what just happened.’’

Kim’s approach shot in regulation barely cleared the water, but stayed in the fringe fronting the green. After Park hit a brilliant lag putt to inches for par to stay at 11 under, Kim chipped in from 18 feet to force the playoff.

She held both hands high, stared into the sky and grinned for the first time after 5 hours of immense pressure, slapping hands with her caddie.

“I just focused on getting it to the hole because that was my only chance,’’ Kim recalled as she was interviewed on TV, so excited that for the first time all week she spoke to the media in English.

In the playoff, staring into the setting sun at breezy Ko Olina, Kim hit an approach that barely got over the water again, then bounced twice and dropped into the hole for an eagle.

Kim couldn’t see the ball go in and neither could Park, but the roar from the crowd made it obvious. Park’s attempt to match Kim’s shot, and win her 14th LPGA title, came up short.

“Inbee said two things to me,’’ Kim grinned. “She asked how I got that in and said congratulations.’’

It was an astonishingly quick ending to a draining day.

The three players were tied for the lead with two holes left in regulation.

I.K. Kim, trying to win an LPGA event for the first time since 2010, bogeyed the 17th, three-putting after converting clutch putts all day. Park sank her par putt from 20 feet to get up and down from a bunker, and Sei Young Kim drained a twisting downhill 16-footer to keep pace. 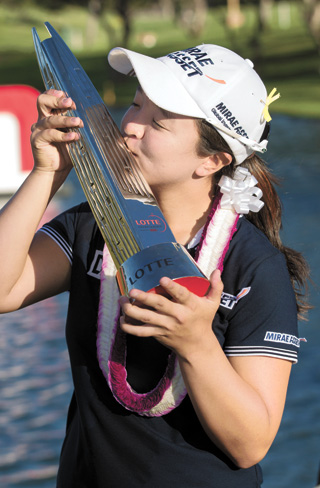 “I told myself, ‘This is probably the last opportunity I have to stay in this tournament,’’’ Sei Young Kim said. 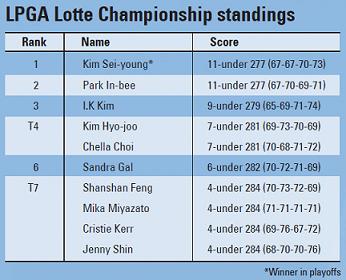 It turned out to be the next-to-last opportunity, and when she saved par on the 18th to force the playoff, she wasted no time taking the $270,000 first prize that bumped her to No. 1 on the money list.

She’s the first two-time winner on the LPGA Tour this year after taking the Bahamas event, also in a playoff, in February in her second start as a tour member. “Today, I didn’t see it coming,’’ Kim Sei-young said. AP