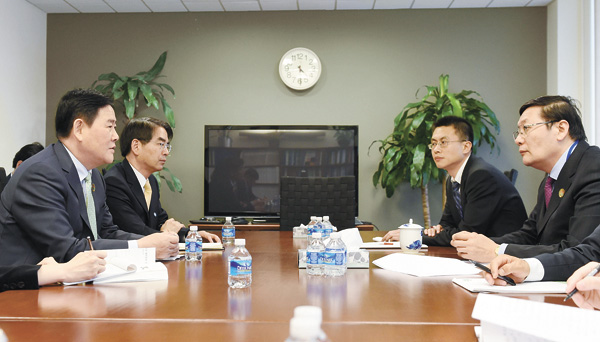 Finance Minister Choi Kyung-hwan expressed his desire for Korea to get a larger stake in the Asia Infrastructure Investment Bank (AIIB) to his Chinese counterpart Lou Jiwei in a bilateral meeting held Friday at the International Monetary Fund and World Bank’s 2015 annual Spring meetings held in Washington.

Just a few days before negotiations over the AIIB begins in Beijing on April 27, Choi asked Lou to seriously consider Korea’s request.

Lou responded that he welcomes Korea becoming the 40th preliminary founding member out of the AIIB’s total of 57 members.

But for Lou, his main priority is completing negotiations on the AIIB’s founding Articles of Agreement among existing members.

Discussions of each country’s shares will be discussed later, Lou added.

He said that discussion should involve all 57 founding members.

“I think Korea’s share will be somewhere around 3 to 5 percent,” Choi said at a press conference held after the meeting.

“There hasn’t been specific criterion adopted so far to calculate the stakes, and the number may differ depending on which standard the AIIB will use, either gross domestic product or purchasing power parity,” added Choi.

“China’s share may be larger than 25 percent if the calculation is based on GDP,” Choi said, “but as China previously expressed its will not to hold a veto right, I think we should hold on and watch the situation further.”

On Friday, Choi also had meetings with the Secretary General of the Organization for Economic Cooperation and Development (OECD) and the international credit assessor S&P at the IMF and World Bank meetings.

Regarding remarks he made about additional fiscal stimulus in the latter half of the year in an interview with CNBC, Choi said, “I meant there may be additional spending later in the year, if needed, because government policies need some time for us to really see the effectiveness.”