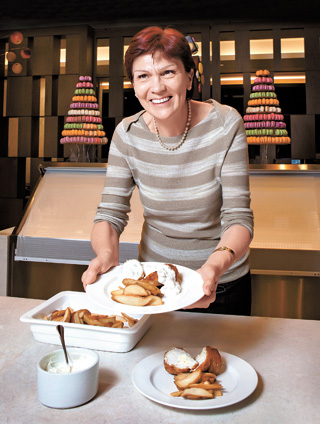 Every great capital has a diplomatic corps representing their countries and promoting their own cultures. Ambassadors are expert entertainers and their spouses are often skilled at introducing the cuisine of their homeland to their foreign hosts. In this series, the Korea JoongAng Daily asks the spouses of Seoul’s ambassadors to introduce our readers to a favorite entree from their homelands. In each installment, her excellency will be joined by a chef from the Grand InterContinental Seoul Parnas who prepares a Korean dish that compliments the foreign offering. Mashitge deuseyo, prijatno and bon appetit!

Being allergic to gluten may lead people to think that Vesna Kazazovic, wife of Serbian Ambassador to Seoul Zoran Kazazovic, is missing out on one of the greatest joys in life - eating.

She can’t consume meals containing “even the slightest bit” of wheat, oats, rye or barley, which makes it very difficult for her to dine out at a local restaurant, in large part because she can’t fluently read or speak the Korean language.

But the former dentist who arrived at the Grand InterContinental Seoul Parnas last month for this cooking series seemed anything but unenthusiastic about food.

She took hold of the reporter to ask what gluten-free soy sauce the Korean chef was using for his L.A. galbi, and repeatedly asked where she could find poppy seeds here for her Serbian cookies. 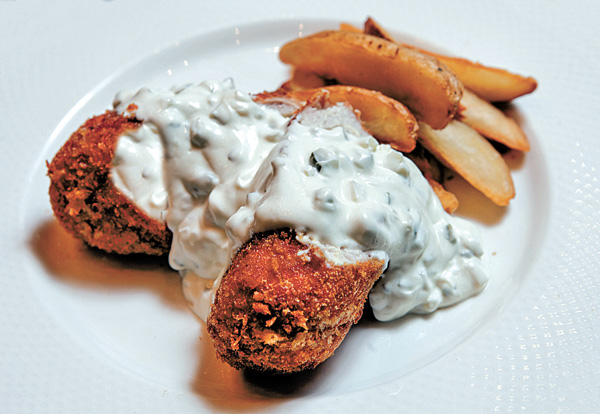 It was as if she was challenging her own disorder by making use of what was available - and allowed - to her, any way possible.


Q. Why did you choose Karadjordje’s steak as today’s main dish?

A. It is a typical Serbian meal that is easy to prepare, and which has ingredients that can be found in any part of the world. Besides that, it’s very tasty. Karadjordje’s steak is made up of meat filled with kajmak, a type of cream cheese in Serbia, and it can be substituted with other ingredients according to taste.

A salad made up of tomatoes, cucumbers and other greens also make a great side dish to this steak. The ingredients can be cut into bite-sized pieces, and then mixed with salt, olive oil and vinegar.

I am already thinking about preparing this dish for my daughters and friends when I return to Belgrade for a visit soon. I may add a Korean twist to it, too.

In my cookbook, I have recipes from places I’ve lived in all over the world, and I regularly use them in my kitchen. They all, of course, have a Serbian twist and are delicious. It is always a pleasure to share my experiences and culinary skills with my friends.

What aspect of Korean cuisine can you find in Karadjordje’s steak?

It’s not easy to find similarities between Koran and Serbian cuisine, but there are some details in this steak dish which have rung Korean to me. For example, some Korean steak dishes are prepared by wrapping meat around vegetables, and then frying or steaming them with sauce. Karadjordje’s steak is made by a filling with kajmak, and then fried in oil. 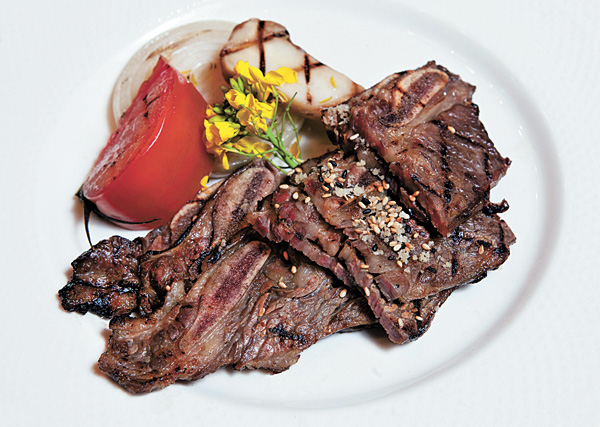 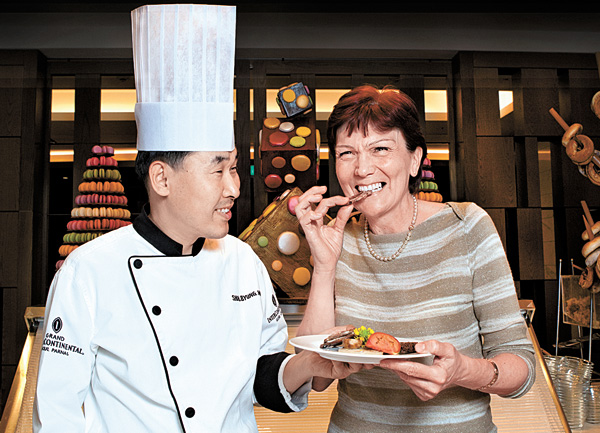 Also, steaks in Korea are usually cut very thin, which is also the case with the Serbian dish we are preparing today.

Serbian cuisine is derived from many different kinds of cuisines. The biggest influences come from Mediterranean (Greek), Hungarian, Turkish and Austrian cuisine. For example, in Vojvodina, which is in northern Serbia, the influence of Hungarian (former Austro-Hungarian) cuisine is quite noticeable. In the southern part of the country, you will find broad aspects of Turkish culinary tastes, too, due to five centuries of rule by Turkey.

Serbian grilled meat dishes have become the symbol of Serbian cuisine, with one of the best known being cevapcici: minced beef rolled into finger-size pieces, grilled and served with finely-chopped onion. There are also other grilled or spit-roasted meat dishes, and hundreds of other tasty meals that chiefly use vegetables. Smoked meat, in particular, is the specialty of western Serbia.

Simple dishes that are easy to make are also a large part of Serbian cuisine. They include cooked dishes involving wheat bread, proja (Serbian bread made of corn flour), pogaca (a type of Serbian bread) and many types of vegetable soups.

A large selection of milk products is used frequently. We have kajmak, various kinds of white cheeses, yogurt, kefir, sour milk and more.

Desserts in Serbia include vasina, dobos-torta, reform-torta or the so-called sitni kolaci - several types of cakes served all together on a single plate. Fruits also make great ingredients in Serbian sweets.

Ajvar, tursija, kiseli kupus and a large selection of homemade jams are also a part of our culinary tradition. These are all-natural, homemade products, which are mostly enjoyed during winter, when there aren’t many fruits and vegetables around to eat.

Served with these various tasty and heavy meals is sljivovica, which is brandy made from plum. Brandy, known in Serbia as rakija, is also made from other fruits including apricot, pear and melon. The strong, alcoholic drinks are often made at home and served only to guests who are friends.

Milk-based products like kajmak and certain kinds of cheeses - but these are products that are exclusively found in the Balkan region, so I don’t expect to find them any place else.


What is the best restaurant in Seoul serving your cuisine?

There is a Serbian restaurant in Itaewon named Belgrade Bar and Grill.

I can’t say that the way I cook has changed much after landing in Korea. But it has been interesting to see the ways ingredients I used in Serbia are used differently here - many times shaping completely different flavors and meals. By learning about such diversity, I’ve come to enrich my culinary knowledge and skills.

Since I have a celiac disease, I can’t really eat out often. I can’t consume foods that have gluten in them, including meals made up of wheat, oats, rye or barley. I have to be careful because I don’t really know which meals contain these ingredients. My husband understands my diet, so we don’t have many chances to eat at local restaurants. However, using the Internet, I’ve discovered some Korean recipes made up of ingredients I can eat, and managed to successfully create them by myself. Royal court stir-fried rice cake, known as gungjung tteokbokki, is probably my favorite Korean dish. It is easy to make, not to mention the great taste. I also enjoy eating bulgogi, as it reminds me of Serbian barbecue, so my husband and I got out for that quite often.

Please give us your personal observations about Korea, and how it compares to your country or other countries which you have lived.

Seoul is a beautiful, modern city with wonderful people. It is also a very rare city in the world in terms of safeness and cleanness, which make it a pleasure for me to walk on the street. My husband and I love talking walks, so I find living in Seoul very advantageous in that sense.

I would like to get to know the cultural customs and language of this country better. I believe that learning the language of a country is one of the basic requirements of understanding its culture. It’s a difficult language to learn, but I will not give up.


Vesna Kazazovic
Born on July 8, 1955, in Belgrade, Serbia, Vesna Kazazovic studied dentistry in university and opened a private practice afterwards, working as a dentist for more than two decades until her husband was stationed abroad. Her two daughters - a 21-year-old news reporter and a 25-year-old marketing employee at a U.S. company - live in Belgrade.

Zoran Kazazovic, Serbian Ambassador to Seoul
Born on Sept. 21, 1953, in Pula, Croatia, Ambassador Zoran Kazazovic studied law at the University of Belgrade and can speak English and Spanish in addition to Serbian. Previous assignments include Brazil, Spain and Indonesia, with Korea being his fourth since last year. Before his posting in Seoul, he served as the head of the Department for Regional Initiatives and the Department for Europe at the Serbian Ministry of Foreign Affairs.

Serbia and Korea celebrated the 25th anniversary of the establishment of diplomatic relations on Dec. 27, 2014.

To mark the occasion, a series of cultural events was organized in Korea, and the Serbian government issued a commemorative postal stamp.

Serbia was among the first countries in Central and Eastern Europe to establish diplomatic ties with Korea.

Serbia considers Korea to be one of its most important partners in the Asia-Pacific region.

Serbia is focused on developing bilateral economic cooperation, as well as attracting more Korean investors and tourists to Serbia.

The overall bilateral trade between the two nations is worth roughly $250 million. In Serbia, Korean brands like Samsung, LG, Hyundai and Kia are well-known for their high quality, accessible prices and reliability.

Investment in Serbia by Korean firms amounts to approximately $60 million.

Yura Corporation, one of the 500 largest companies in Korea and a producer of auto parts, has opened four factories in Serbia and employs more than 5,000 people in the country. Samsung Electronics has also opened a branch office in Belgrade.