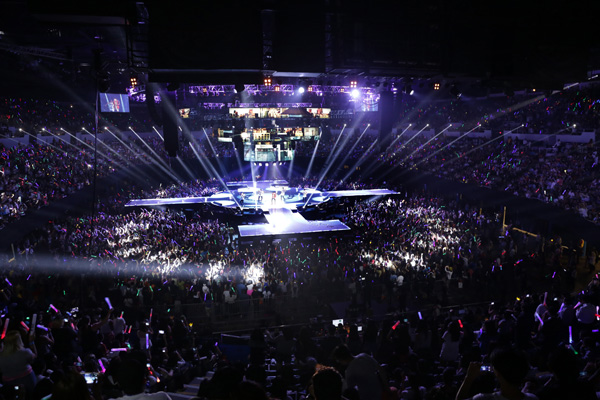 When you’re into a person, you’re naturally drawn to discovering his or her most intimate details.

The same goes for fans of K-pop stars.

Followers of these celebrities want more than to simply see their favorite singers perform at concerts or act on screen. They want to get to know them personally - finding out about the clothes they wear, the makeup they use, the food they eat, how they eat it and where they hang out.

Essentially, that’s what KCON, one of Korea’s largest conventions on so-called K-culture, hopes to provide. The event is organized by CJ E&M, also known as CJ Entertainment, the showbiz affiliate of CJ Group.

The annual convention, which concludes with a large-scale K-pop concert, began in 2012 in Los Angeles, a city with a large population of Koreans.

CJ Group executives, including Chairman Lee Jay-Hyun, has said on numerous occasions that the company’s goal is to make people around the world watch two or three Korean films a year; eat Korean food once or twice a month; watch one or two Korean dramas a week; and listen to Korean music every day. CJ has film, food, restaurants, retail and logistics businesses, among others.

One of the conventions will be held in Japan for the first time this year. KCON 2015 Japan will start on April 22 at Saitama Super Arena in Saitama amid soured bilateral ties between Seoul and Tokyo due to intensified historical and territorial disputes.


Why Japan and why now?

The word “CON” in KCON stands for three things - convention, concert and cultural content - three things visitors can experience at the event.

“In order to increase KCON’s presence in 2015, we’ve added more destinations,” CJ E&M said through a press release. “Besides Los Angeles, where it has been held every year, we’ve added the east side of the U.S. as well as Japan. A total of three KCONs will be held this year.”

CJ E&M chose to hold a KCON in Japan as it has hosted the “M Countdown” K-pop concert in the nation around this time most years anyway and because it is where Hallyu, or the popularity of Korean pop culture abroad, began more than a decade ago.

The fervor has reportedly died down somewhat in Japan, but insiders have noted that this is more motivation for Korea’s entertainment industry to focus on the market there. In Japan these days Korean stars are banned from appearing on morning shows, which are often platforms where foreign celebrities gain recognition, raising concerns that although there is a remaining dedication to existing stars, there aren’t new fans of up-and-coming stars.

What’s notable about KCON is that it is aiming to help small and midsize companies with little marketing capabilities, resources or connections make a successful entry to the Japanese market and make the most of Hallyu. 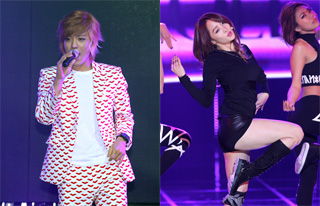 CJ has unveiled the lineup for the upcoming KCON 2015 Japan’s M Countdown. They include (from left) KangNam, Nicole [JoongAng Ilbo]

Between Feb. 23 and March 6, CJ E&M and the country’s Small and Medium Business Administration (SMBA) received applications from small and midsize companies in business areas closely related to K-culture.

What’s interesting, according to CJ, is that about 70 percent of the companies going to KCON Japan have a track record of attempting to make inroads into the Japanese market and failing.

Separately from the April 22 KCON 2015 Japan - which will take place between 10 a.m. and 6 p.m. and is open to the general public - there will be another opportunity for the companies to promote themselves in Japan.

“In a separate event on April 20 planned by CJ E&M, SMBA and [the Korea Trade-Investment Promotion Agency], the companies will get to have business meetings with about 70 to 80 Japanese buyers,” said Jung Yu-jin, a senior analyst at CJ E&M’s PR Team. The meetings will take place at Hotel New Otani Tokyo.

KCON 2015 Japan will close with a large-scale, star-studded K-pop concert.

“The lineup for the upcoming KCON 2015 Japan’s M Countdown includes 10 solo artists and groups,” CJ said in a press release on March 31.

The acts include boy bands Block B, Boyfriend, GOT7 and Infinite, and girl groups Lovelyz and SISTAR.

Nicole (a former member of KARA) and KangNam (or Namekawa Yasuo) will also perform.

KangNam, a Korean-Japanese member of the Korean boy band M.I.B., has been appointed as the honorary ambassador of KCON 2015 Japan. Fluent in both Korean and Japanese, the 28-year-old has been expanding his presence in Korea’s entertainment shows with his witty comments and comical character.

The number of visitors to KCON has doubled every year since it first began in the United States in 2012, according to CJ. Last year’s KCON in Los Angeles attracted about 40,000 people.

The date for KCON in the United States is expected to be in August.