Rain given accolade in China

Rain given accolade in China 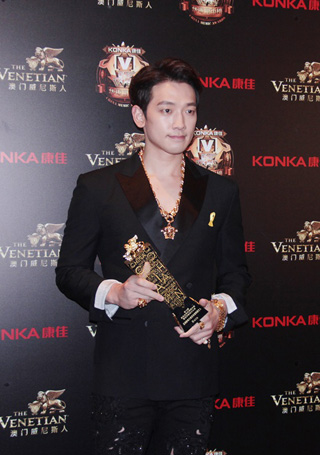 Singer-actor Rain was honored as the Most Influential Korean Artist in Asia at the 19th annual China Music Awards (CMA) on Thursday.

The show, which is China’s biggest music awards ceremony, was broadcast across China.

“I’m very thankful to CMA and all the fans who allowed me to be here today,” said Rain, the only Korean artist to be honored in the 19th CMA.

“I will always try my best to become a better artist.”

During CMA, Rain performed hit songs such as “30Sexy” and “LA SONG,” showing the charisma he has as a singer and a dancer that also won him a prize.

Rain has been gaining popularity as a singer and an actor around the world, actively performing not only in Korea but also in other countries.

The star first made his debut as a singer with his album “Fanclub” in 1998. He then started his acting career with the Korean drama series “Sang Doo! Let’s Go to School” in 2003 and has been taking part in movies and dramas in Korea and around the world since. He has appeared in Hollywood movies like “Ninja Assassin” (2009) and Chinese films such as “For Love or Money” (2014).