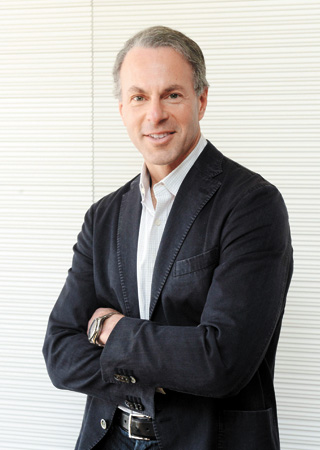 Newcomers to Korea may wonder why their beloved online commerce platform eBay is not to be found here.

But the world’s biggest online shopping company has, in fact, been exercising a unique and successful localized strategy: removing the eBay label and operating two e-commerce leaders, Auction and Gmarket, which it acquired in 2001 and 2009, respectively.

Devin Wenig, president of the eBay Global Marketplaces business unit, says Korea is one of the top five markets in the world and, at the same time, “really important” for eBay.

“Korean business has been one of the most steady-growing businesses in the eBay portfolio and one of the leaders in innovation,” he told the Korea JoongAng Daily during a recent visit to Seoul. “I would say in terms of retail standards - meaning what the consumer experiences - our Korean business is probably the most advanced in retail standards of any of eBay businesses anywhere in the world.”

He added that eBay’s business in Korea, where tech-savvy consumers abound and the smartphone penetration rate stands at almost 74 percent, is likely five years ahead.

“We are doing some real innovation around shipping and payments, meaning investments in the consumer experience. We are probably three years advanced in payments and a year or two for shipping [in Korea],” he said.

The e-commerce bellwether’s Gmarket and Auction, both ranked in the top three in revenue, operate differently from the likes of Amazon or other mobile commerce players in that they enable merchants to plug into a global buyer base.

But the competition is becoming ever fiercer among all the players involved, especially given that the race to offer lightning-fast delivery service and quality goods applies to each one.

And once the company’s scheduled eBay-PayPal uncoupling is completed later this year, he will replace John Donahoe as CEO of eBay Inc.

In September, eBay announced it would spin off its PayPal business into a separate publicly traded company in 2015.

During the conversation, the eBay CEO-designate shared his ideas on the direction of online markets, the future and vision of those platforms, as well as the overall retail scene. Following are edited excerpts.

Q. What differentiates Korea from other markets for eBay?

A. One of the challenges we have always had is that we have a great advantage being a marketplace, but historically marketplaces don’t control every aspect of the experience. The innovation in Korea has been, “How do you solve that problem? How do you maintain the business model of being a marketplace that we love? How do consumers have confidence they are going to get great experience every time?”

Korea has innovated around that problem - shipping, fulfillment, payment, selection and consumer trust.

In addition to Korea being an important market, we are learning from what happens here and making that exportable to eBay’s markets around the world.

A lot of Koreans tend to buy hard-to-get vintage fashion items from eBay sites in the United States and United Kingdom.

Actually, what I hope to accomplish as the new CEO is to begin to evolve the brand a bit. According to Interbrand [a market researcher], eBay is the No. 28 brand in the world.

But most people associate it with what you said. We are not embarrassed about it, but now 70 percent of what we sell is new and at a fixed price. We want the eBay brand to be associated with being able to shop for anything, however you want. If I want vintage, I can get that, but I might want brand-new shoes, for instance.

Competition among e-commerce business operators is getting tougher. What’s your view on the future of commerce?

I think retail has to evolve very quickly. Over half of the $14 trillion mobile commerce market is now digitally influenced. Whether or not transactions are closed - online or over smartphone - consumers are researching online. I just think we’ve hit an inflection point where technology is now so pervasive and so useful that we’re past the tipping point.

The world of e-commerce and commerce are now just seamlessly merged, and everything is omni-channel. It’s not about the phone or the desktop or the store - it’s about all of those.

Many people predict the death of the store. I would say it has been greatly exaggerated.

There will be a transformation of retail real estate, but not an end to it. You could step back and connect the dots and say, “The world’s going to have e-commerce only,” and that “stores are dead,” but we don’t see that future at all - in part because I don’t think consumers want that future. I think people like to shop and they like the serendipity of stores. Shopping is as much about entertainment and engagement as it is about utility.

Amazon.com’s retail sector is probably entering Korea sooner or later, and Alibaba is arriving here, too. What’s their implication for eBay Korea?

We compete in many other markets and I assume they will, too. It’s a big world and there’s room for Amazon, Alibaba and eBay. I think we are very focused on consumer experience and confident about our market position. My assumption is that new competitors will be competing in Korea and around the world but what we are competing for is the $14 trillion mobile retail industry. Based on that, there should be plenty of room for multiple parties, and ultimately their entry will grow the market pie here.

How will retail evolve in the next 10 years and how is eBay preparing for it?

That’s a very expensive model, and it’s a very inefficient model. What e-commerce has shown is that, particularly down the trail, it’s a much better business model to be just in time. I think that there’s a pattern in there for the way stores will transform. They will become technology-enabled so that you can go to a store and see enough inventory, but you may shop “shop-able windows” that we built with brands.

Everybody is now talking about “mobile only” instead of “mobile first.” As a leader in mobile commerce, how is eBay preparing for the era of “mobile only?”

Mobile has become a driving force, enabling people to shop anytime, anywhere on any device. I would argue we have now entered the post-mobile era. Shopping behavior is now multi-screen. Mobile is ushering in new opportunities. It’s driving the sharing economy. Connected screens are everywhere - on your wrist, on your eyes, in your hand. We no longer think of mobile as a stand-alone department, we have mobile embedded in everything we do.

Four years ago, eBay globally sold nothing on mobile, 100 percent on the desktop. But this year, over $30 billion sales were made on mobile. My favorite statistics is we usually sell about 12,000 new and used automobiles on mobile every week. Every couple of seconds, somebody is taking out a phone and buying a car. Why not a house? A couple of weeks ago, we found out that among the 10 priced items sold on a phone on eBay, which are usually jewelry, watches and cars, there was a $1.2 million Bugatti. It is incredible.

What kind of technology does eBay incorporate to bring that online shopping experience offline, or the other way around?

Online and offline are evolving into a shopping ecosystem, where the connections between the web, mobile and brick-and-mortar (and beyond) inform and drive a purchase. Today’s shopper hops from desktop to tablet to smartphone to brick-and-mortar, and the most successful retailers address their needs across all channels.

In late February, eBay joined forces with Australian supermarket chain Woolworths to boost spending by making it easier for shoppers to collect online purchases. Under the “click and collect” partnership, eBay customers will be able to pick up their online orders from parcel pick up points and lockers in more than 90 Woolworths supermarkets and BIG W stores. EBay predicts the service would expand to 250 sellers within two months.

We partnered with fashion brand Rebecca Minkoff. It opened its first retail store in the United States - which opened in November 2014 in New York - and features dressing rooms that can recognize you, interactive walls that give access to Minkoff’s entire online inventory, and associated apps that personalize the shopping experience. Minkoff - understanding that its clientele is highly connected - created an immersive digital experience that brought the best of e-commerce into the physical world with the power of eBay technology.

This type of just-in-time shopping resonates with the connected consumer, as does an international selection.

Can you share eBay’s vision for Korean buyers who are increasingly becoming global shoppers and sellers who want to win in the ever-competitive e-commerce market?

We’re the largest cross-border marketplace in the world. And over 20 percent of our overall business is cross-border, and it’s the fastest growing part of our business. Marketplaces like eBay that may have had pockets of inventory in domestic markets now increasingly view it as a single global marketplace. We should be trying to sell all inventories to all consumers everywhere all the time.

We have small sellers around the world that are now doing more than half of their business outside of their national borders. Picture a small collectible plant seller in Korea, and they export home-grown plants called Haworthia to more than 30 countries around the world. Up to 80 percent of their sales come from exporting through eBay.