Tech’s where the rubber meets the road

Tech’s where the rubber meets the road 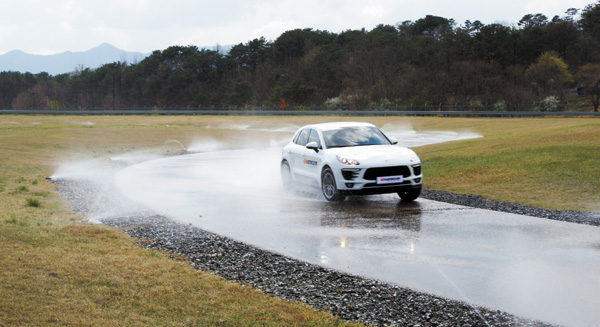 GEUMSAN, South Chungcheong - The ultimate goal for Hankook Tire is to become a leading manufacturer in the global market, not only in sales but also in the level of its technology, and it said such goals will be accomplished when it starts supplying high-end products to supercar brands like Ferrari and Lamborghini.

The company announced last week it had taken a big step in that direction by supplying tires to luxury German automaker Porsche, particularly for the Macan SUV. In doing so, Hankook became the first Korean company to win a contract to supply original equipment (OE) to Porsche.

In a test drive in a Macan equipped with Ventus S1 evo2 tires on the track at Hankook Tire’s Geumsan plant in South Chungcheong, the SUV showed no problems making sharp turns at speeds of 80 kilometers per hour (48 miles per hour) even though the pavement was soaked by sprinklers to simulate rainy conditions.

“We have been working with Porsche on the tire for four years to provide a product that can support the Macan’s driving performance,” said Woo Byung-il, senior vice president of Hankook Tire’s Global Original Equipment Division. “It wasn’t easy, but we successfully finalized the deal by satisfying Porsche’s strict standards, and I think we can say that we have upgraded our technology level once again. The new 18- and 19-inch tires were developed just for the Macan.”

Woo added the company aims to put its tires on Porsche’s other high-end models such as the 911 sports car.

Hankook is the world’s seventh-largest tire manufacturer in terms of sales and competes with leading brands such as Michelin, Continental and Goodyear.

Porsche is one of the high-end auto brands the company needs to be associated with to become a top-tier name in the tire business. The company started supplying OE tires to Mercedes-Benz, BMW and Audi after a 2013 deal to put OE tires on Mercedes-Benz’s S-Class cars. Hankook also has been aggressively expanding OE sales for high-performance sports cars such as the Audi TT and Ford Mustang.

The company also demonstrated its run-flat tire technology, which enables cars to travel up to 100 kilometers (62 miles) at 80 kilometers per hour after a blowout. In order to experience the run-flat tires, three reporters sat in a Mercedes-Benz C-Class sedan as the driver went through slalom and straight courses with no problems.

“BMW currently uses run-flat tires on 70 percent of its cars,” said Jung Hyo-joon, deputy manager of the BMW and Mercedes-Benz project team at Hankook Tire. “Since German brands want to provide good safety for their customers, it is necessary to secure such technology.”

The company added that the run-flat tires supplied to BMW and Mercedes-Benz are its third-generation product, and it aims to introduce a fourth-generation model by 2017 that will be lighter and more fuel-efficient. 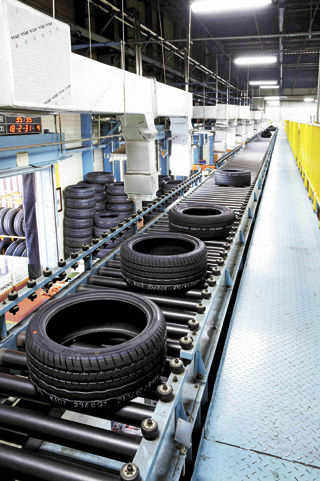 The company said sales of ultra-high performance tires increased by 6.8 percent in 2014 from the previous year, and sales of run-flats and racing tires also rose 10.8 percent. Last year, the company posted 6.68 trillion won ($6.2 billion) in revenue and 1.031 trillion won in operating profit.

At the Geumsan plant, the company produces 24 million tires per year, or 65,000 per day. The plant is the nation’s largest tire production factory and was built in 1997 on 872,000 square meters (215 acres) of land. A total of 2,800 employees work 24 hours a day on a three-shift system to produce about 25 percent of the Hankook’s total output. Last year, the plant produced 93 million tires, which were sold in 180 countries. The company said it aims to produce 100 million tires this year, 38 million of them for automakers.

Since 1999, OE tire sales have been growing an average of 12 percent annually. Hankook supplies 27 automakers, and Hyundai Motor and Kia Motors are its biggest customers, purchasing more than 10 million per year.

The company operates seven plants - two in Korea, three in China and one each in Hungary and Indonesia - and is building a U.S. plant in Tennessee. Hankook said it aims to expand its market share in the United States by targeting popular Japanese brands Toyota, Honda and Nissan.

“Our ultimate goal is to supply OE tires to supercar brands such as Ferrari and Lamborghini,” said Woo, vice president of the global OE division. “We can’t give the name, but we can say we will have a meeting with one of the supercar brands this month to let them check whether we have the necessary level of technology to be associated with them. We expect to step into the supercar market by 2020.” 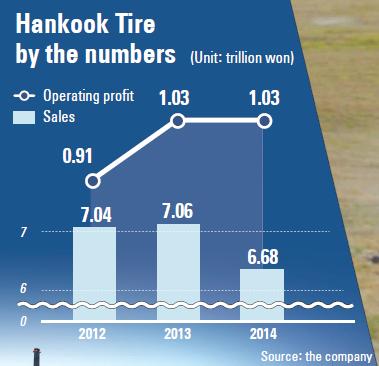