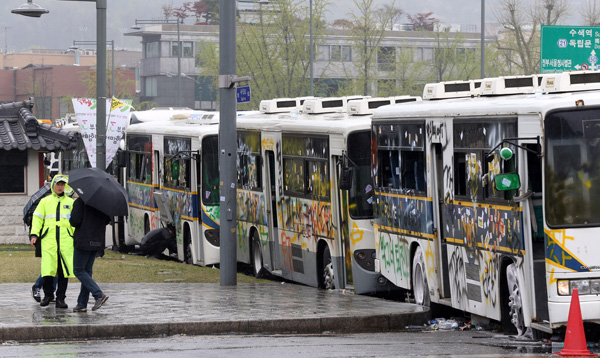 Police vehicles being used as a barricade to block protestors demanding an independent investigation into the Sewol sinking from marching toward Gwanghwamun Gate in central Seoul were waiting to be towed away for repairs on Sunday. The police vehicles were damaged or defaced by protestors. By Kim Seong-ryong

Demonstrators calling for a truly independent investigation into the sinking of the Sewol ferry clashed with police following the first anniversary of the tragedy, leading to the arrest of more than 100 protestors, including the parents of children who perished in the disaster.

A large rally with more than 10,000 protestors that included the families of the victims scuffled with police Saturday as they tried to break through barricades of police vehicles to get to Gwanghwamun Gate in central Seoul.

The police used pepper spray and water cannons and took nearly 100 protestors to police stations for questioning. About 20 relatives of Sewol victims were held, including Kim Young-oh, the father of student victim Yu-min, who went on a 46-day hunger strike last summer calling for an independent investigative committee. The family members were released after a short time

To block the protestors from marching toward the symbolic gate built in front of an ancient palace, the police used over 470 vehicles to form a barricade and 13,700 uniformed men. 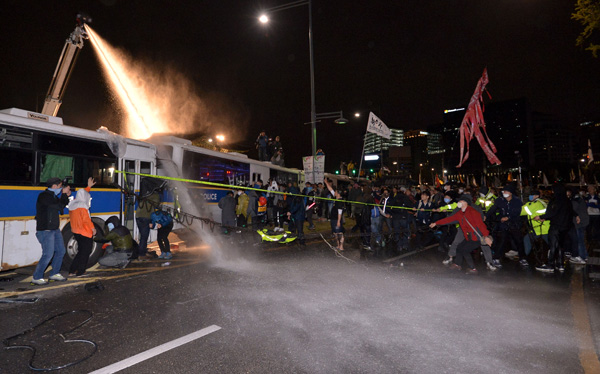 Police fire water cannons to disperse protestors as they try to overturn police vehicles that were being used as a barricade to block their march towards Gwanghwamun Gate in Central Seoul on Saturday. [NEWSIS]

The clash between the protestors and the authorities Saturday illustrated the lack of trust felt by the families in the government’s probe of the causes of the tragedy and its own terrible rescue response. Specifically, they are demanding the withdrawal of a government ordinance that will require members of the government to be part of the committee conducting the probe. Under an ordinance declared by the maritime ministry last month, the government will send vice-ministerial-ranking officials to take key positions on a special committee that will be formed to carry out the investigation.

The special committee is being set up under a law passed by the National Assembly last year with support from both the ruling party and the opposition. But the ordinance is separate from that law. It required a vice-minister-ranked official to be the committee director for planning and coordination.

The families are certain that the government is deliberately undermining the independence and objectivity of the investigation to keep from being embarrassed by its findings, especially about the botched rescue efforts that doomed many of the victims.

They are also upset over what they say is the government’s unilateral decision to provide compensation for the loss of their loved ones. In announcing the amounts of compensation to be given to the victims earlier this month, which are based on the occupations and ages of the victims, the government said families that take the money can’t challenge the government over the outcome of the special investigation or any settlements in the future.

The Park Geun-hye administration set Sept. 28 as a deadline for applying for compensation. The victims’ families are demanding that compensation be handled after the investigation into the sinking is complete.

The deepening row between the families and the government has prevented the investigative committee from doing any work.

Meanwhile, the National Police Agency said Sunday it will fine anyone responsible for having led what it called “a violent, illegal protest” and damaging police vehicles and equipment as well as injuring men in uniform.