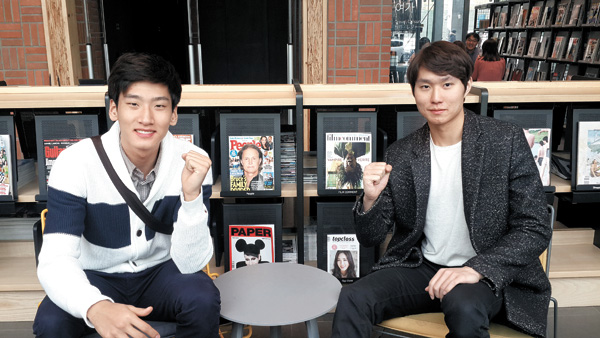 Left attacker Song was named V-League Championship series MVP and was fourth in attacking during the regular season with a 54.06 success rate. Lee was the setter that fed Song and Simon with accurate tosses. Song and Lee, both 22, met at Songlim High School in Seongnam, Gyeonggi, and have been playing together ever since. They also led Kyonggi University to the national college volleyball championship.

In an interview with Ilgan Sports, an affiliate of Korea JoongAng Daily, last week, Song and Lee talked about their thoughts on coach Kim, Simon and the team’s memorable season.

Q. This season was officially over with the end of Korea-Japan V-League Top Match. How do you feel?

A. Lee: I feel so relieved. Since we had some trouble early, I was wondering when the season would end, but I think we wrapped it up nicely. For the V-League award ceremony, I was sitting in a front row seat. Last year, I was in the back, and I noticed this is why you should win the championship.

Song: Last season, we were the team that had the shortest season, but this time we had the longest. While other teams are at the end of their vacation, we can begin our vacation. I can now feel that the season is really over. And as I look back, it was really a fun season. 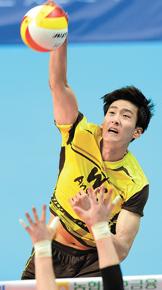 Lee: I still can’t forget when I first passed the ball to Simon. Back then he wasn’t 100 percent fit because he had just arrived in Korea. I tossed the ball pretty high, but he was able to hit the ball even if he didn’t fully stretch his arms. I thought, “This guy really isn’t a joke.” I had seen a lot of him on video, but as I watched him playing in front of me, he looked like a much greater player.

Song: I knew he was a world-class player, but only playing with a fast attack. In Korean volleyball, foreign players should make a good spike because the attacking process is made with two contacts. At first, he was a question mark for me, but as time went by he mastered the attack. I really had a lot of faith in him.

Simon also carried a veteran role. How did you guys feel?

Lee: Yes, he did. He acted like a leader, also helping our captain. I heard some foreign players show their temper on the court, but Simon didn’t. He encouraged and woke up players. If foreign players can’t be in harmony with the team, they will lose trust.

Song: When we score, Simon and I celebrate by having a chest-to-chest contact. No one ordered it, it just became natural. He just opens his heart to players (laughs).

Did you guys think that you got better playing with Simon?

Lee: Of course. I think it’s a great fortune for me. When would I have chance to toss the ball to Simon like this? In the past, I hesitated a little bit when the team was going a for quick attack, but with Simon, he just takes care of it by himself.

Song: For setter Lee, I think he was a big help. But as an attacker, since we play in different position and style, something I actually learned from him was blocking. His power and accuracy are really great.

Coach Kim is known for hard training, even from the team’s first season.

Lee: This year, the amount of training was like last year, but as the number of games increased, I was really tired. In addition, since we needed to produce some results this year, the intensity of the training was high. But what’s certain is that coach never pressured us to win. Not even once.

After losing to the Bluefangs in the fourth game of the regular season, there was a team dinner when the coach had a face-to-face meeting with players. What did you guys talk about?

Lee: I opened my heart to coach when I had a meeting with him. He wanted me to pursue quick plays, but I had no confidence. I was confident of controlling when making high tosses, so I first wanted to recover my condition by doing what I am good at. I said to the coach that I can’t do what he has ordered me to do, but he told me not to talk like that. He said we couldn’t change our team’s color and that make quick plays would revive me.

Song: I was feeling I had lost my identity by not being a regular. I even thought that my position was stolen. It was my first shocking moment since I played volleyball. I also opened my heart to the coach, even showing my tears.

How would you guys characterize coach Kim’s style?

Lee: He is a person who doesn’t erase each player’s own style, but corrects them when they are going in the wrong direction. He respects players’ style and then draws a big picture.

Song: He has this power that you just need to follow, like he has some kind of aurora.

Now you guys are in the defenders’ position. Do you feel any pressure?

Lee: I’m accustomed to pressure to defend because I was in that situation twice during my college years. When seniors told us, “Let’s do it,” we sighed because you really need to work hard in order to defend. For the first time, we played with a desperate mind.

Song: The Bluefangs have achieved what they have by maintaining their tradition. In our college years, we also kept our tradition. Some people say we lack experience, but we defended titles in college. We already know that by defending the championship, more good things will happen.

Lee: I want to be acknowledged by players. No one knows better than players who play alongside me. I think that will be my eternal goal as a volleyball player.

Song: My personal goal is to be better than any other player. Certainly anytime, I will be compared with others. Even if I get compared, I just don’t want to be behind that player. If my full scale of volleyball career is at 10, I think I’m now at 3 or 4. I still have lot of things to do.