Tigers look to regain their standing in Giants series

Tigers look to regain their standing in Giants series 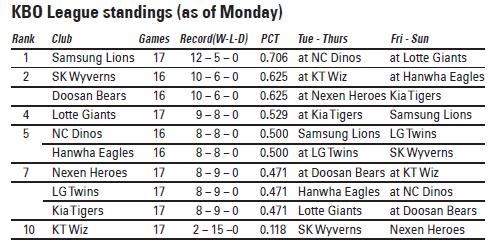 The Kia Tigers were having a sensational start to this year’s season, winning six games in a row. But in the past two weeks, they’ve collected only two wins, losing nine games and slipping from No.1 to No.7 in the rankings.

Closer Yoon Suk-min, who returned this season from the United States, isn’t helping. The last time he made a save was April 5.

The Tigers are looking to end their drought at home in a three-game series against the Lotte Giants that starts Tuesday. The Giants have lost their last three games.

The Doosan Bears have won their last four games, but that could change soon; they visit the Nexen Heroes, which are having a three-game winning streak, on Tuesday.