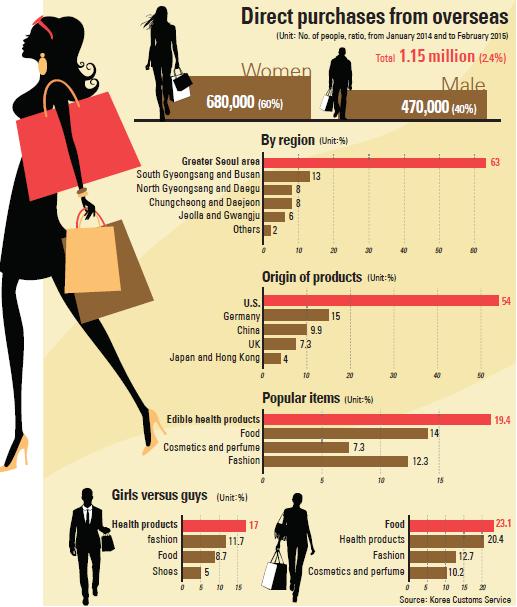 When men and women go online to buy things from overseas, they have very different tastes.

And fashion is not the No. 1 priority for either.

In fact, the favorite product that Korean men buy from abroad is edible health products including supplements like vitamins. For women, food is the most popular item, followed by health supplements and fashion items.

These were the findings of the Korea Customs Service after surveying direct purchases made by 1.15 million people between January 2014 and last February. Some 2.4 percent of the total 51 million population of Korea made direct purchases from overseas.

According to the customs agency on Monday, women were more active than men in making direct overseas purchases. Of the 1.15 million buyers, women accounted for 60 percent.

Most of the buyers were concentrated in the greater Seoul area including Gyeonggi and Incheon. The area with the second-largest number of direct overseas purchases was South Gyeongsang including Busan.

Goods from the United States accounted for a dominant 54 percent of the purchases followed by Germany with 15 percent. China only accounted for 9 percent.

People over the age of 20 were most interested in buying edible health products and fashion while teens were mostly interested in purchasing fashion goods followed by health supplements.